Mr FF last weekend developed a UTI urinary tract infection.  It’s not the first time he’s had this problem, probably due to lack of hydration, so he emailed our Italian doctor asking for anti biotic.  5 emails, several unanswered phone calls and a WhatsApp message later, all without response, he decided to go down to the surgery, a neighbour told him no appointment was necessary.

First of all we couldn’t find the surgery, it’s in the lower part of the village, an area we’ve barely visited since last we arrived last July.  We asked at the garage we use which is in the same road and a nice young mechanic took us to an unmarked door at the side of a residential building.  There was no signage at all except a notice on the door saying access was only by appointment which could be made during surgery hours by phone or email, I beg to differ.  MrFF decided to chance it and after waiting half an hour until everyone in front of him had been seen he took his turn with the doctor.

I waited outside, wandered down to the pharmacy and decided it would be quicker to walk back there with his prescription than move the car.  MrFF was a long time but eventually emerged with a handful of prescriptions, 5 in total, and a letter to make an appointment for a lung xray at the hospital where we had our vaccines.  He only went in with a UTI.

He said the lady doctor had given him a thorough examination, checked his blood pressure and listened to his chest which she said was slightly noisy.  MrFF puts this down to the dusty work in the garage grotto, though he did wear a mask and a shower cap.   She prescribed an inhaler for his chest, more of the nasal spray he uses for his sinus, antibiotics for the urinary infection, some cream for his dry skin and something for the cold sore that had just appeared, because he is a bit run down and always forgets to put spf on his lips despite me constantly reminding him and buying appropriate lip balms. 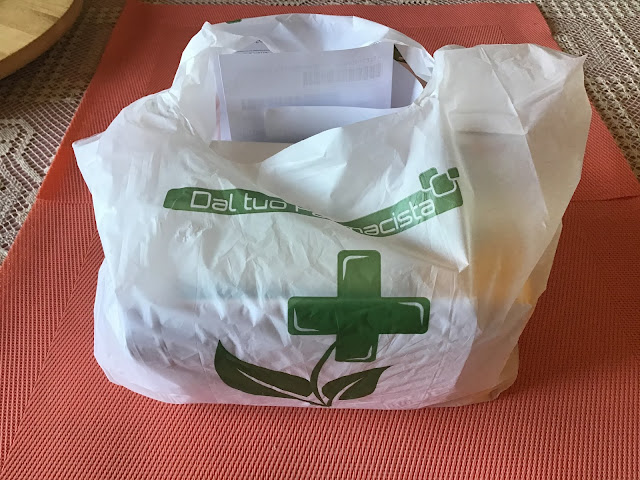 The chemist was very helpful, said some items were free and charged him 51 euro, that bag of medication should keep him healthy for a while.  We have no idea why it was impossible to get a response from the surgery and were starting to worry, if we’d had a real emergency and needed a doctors visit that could have been a problem. However there are no complaints at all about the consultation and MrFF is feeling better already.   I must try and keep him in good shape in future, I’ll take him some water now, he’s currently in the recovery position on a terrace sun bed.
Posted by Jennyff at 13:20