WE ARE IN ITALY, THERE IS NO SNOW, THE HOUSE IS WARM, WE ATE LUNCH OUTSIDE. TODAY I ASK NO MORE. HAPPY NEW YEAR
Posted by Jennyff at 18:54 12 comments: 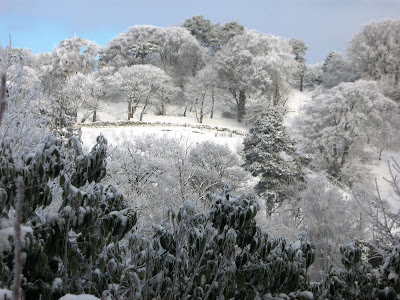 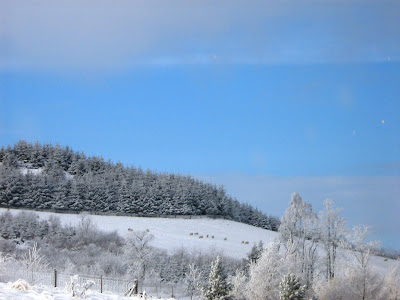 Gourmet meal planning - total failure we have settled for a chicken 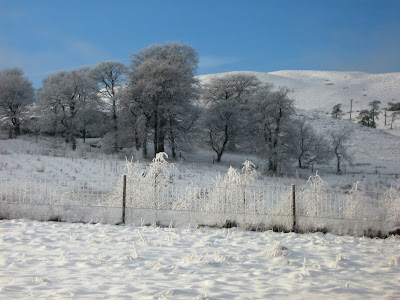 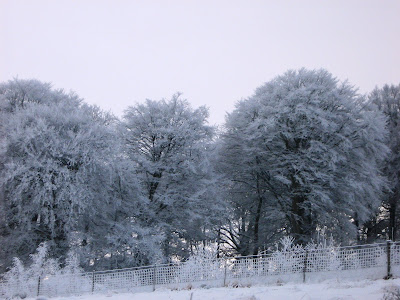 Having enough - complete success including a functioning boiler 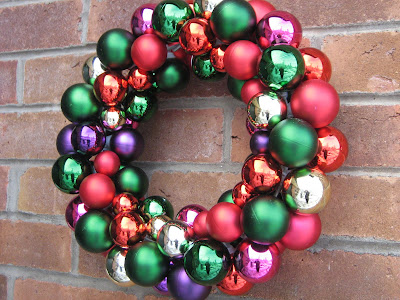 Happy Christmas everyone
Posted by Jennyff at 10:51 15 comments:

In the bleak first day of winter 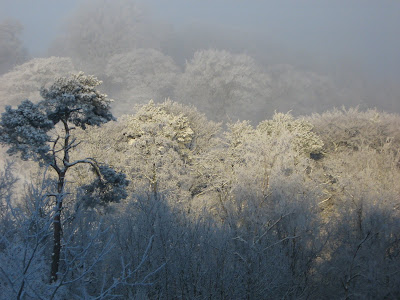 Today the solstice marks the first day of astronomical winter and the shortest day of the year for the Northern Hemisphere, since the lowest recorded temperature in our little road during this cold spell is minus 15 it doesn't bode well.
Mr FF went down to Yorkshire at the weekend and though his journey home took twice the normal time he got back safe and sound, presents had been exchanged, office event attended and relax. I stayed home hoping the boiler man would arrive with the awaited spare part but he had emergencies to attend to. Our boiler is still working but not the automatic function, so this morning as usual I got up to switch the heating on whilst admiring the ice patterns on the inside of our bedroom window. Unfortunately there was a large pool of water on the boiler cupboard floor, we still have the heating working and Mr FF is hoping to investigate today. It doesn't look good and the nice boiler man is busy until at least Thursday. Hey ho, there are many people in worse situations, a neighbour has now run out of oil and the first possible delivery date in 06 January 2011, we are not living in Heathrow Airport or queuing for hours in the hope of catching a train, we are fine if a little concerned about going to Italy after Christmas. 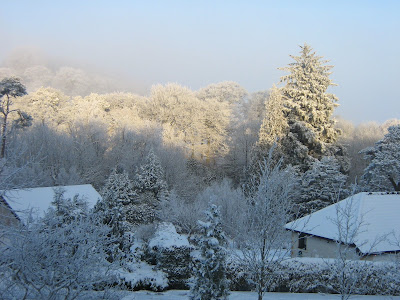 Apart from walking down into the village at the weekend to collect the papers that are left at the village hall and regularly clearing the drive, I have been no where. Which is a pity as I've rediscovered the pleasure of wearing the chullo that Mr FF brought me back from Peru many years ago. 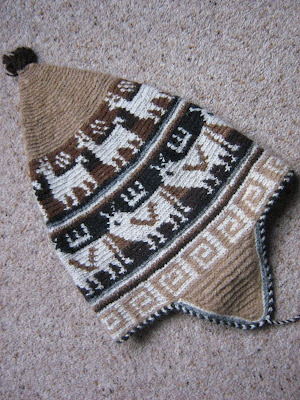 I look a complete ticket in it I admit but wearing it makes me extremely happy which will surprise a lot of people who know that I would never ever wear one of those silly paper hats from a Christmas cracker.
Hope you are waiting for Santa somewhere warm and cosy, not long now.
Posted by Jennyff at 16:34 13 comments:

He's going to find out who's naughty and nice 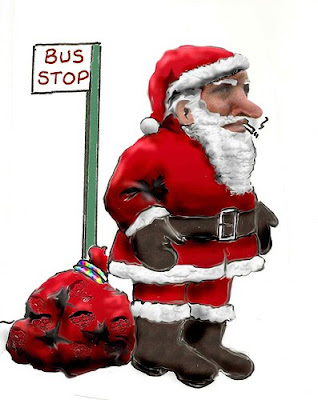 Mr FF was out with his walking group yesterday. He told me such a fib when he got home. Firstly he said that he saw Santa get off a bus which obviously wasn't true because we all know that Santa travels on a sleigh drawn by reindeer. He then said that Santa had a fag before selling the Big Issue outside the Co-op, which again can't be true because at this time of year Santa is beyond busy supervising his elves as they finish and pack gifts.
Mr FF better watch out or his stocking will be empty on Christmas morning, in fact it probably will be as I haven't been out for ages to trawl round for the usual £5 worth of interesting and unusual gifts - I mean Santa hasn't had time.
Posted by Jennyff at 09:40 10 comments:

Me the snow and the sofa 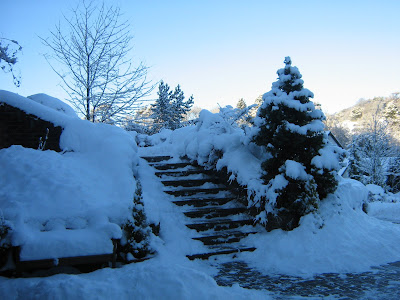 We had so much more snow yesterday that central Scotland came to a complete standstill with motorways gridlocked, public transport cancelled and schools closed. This afternoon more than 24 hours later there are still over 1000 vehicles in the Strathclyde (our) region trapped in the snow. So I'm grateful that Mr FF and I are home and safe even though our central heating boiler broke down yesterday and its minus 10 outside. The boiler repair man is on his way, the stove is lit and I am wearing three layers, the middle one of which is cashmere so I'm fine though getting out from under the duvet this morning was a challenge with ice on the inside of our double glazed windows.
I've continued to keep the drive clear mainly because I love clearing the snow, and not for the benefit of Mr FF who is banned from going out. He was toying with the idea of a meeting in Glasgow tonight but someone more sensible has cancelled it. 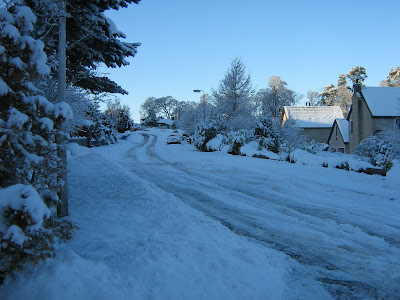 Besides though our drive is clear the road out of our little development looks like this. 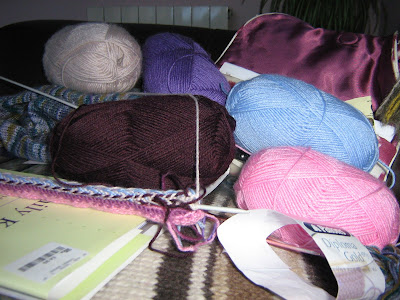 Once I've cleared the snow, topped up the bird feeders and brought in more fuel I've been welded to the sofa with this beside me
I'm knitting a little fair isle cardy from Debbie Bliss's Family Knits. I'm not totally enamoured with the Patons Diploma Gold 4 ply I selected, the strands have a bad habit of welding themselves together as I twist them rather like mohair which doesn't make for smooth knitting. 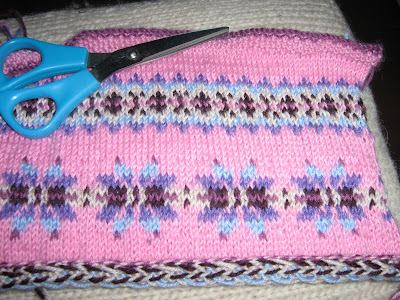 All my Christmas sock and glove orders are finished so the pressure is off, I just need to get out and deliver them when I can prise myself away from the stove.
PS at 21.34. The lovely boiler man came, said we needed a new part but managed to get the old part working for now. The house is warm, the conservatory is back above freezing, I am reduced to 2 jumpers, good boiler man.
Posted by Jennyff at 16:21 15 comments: 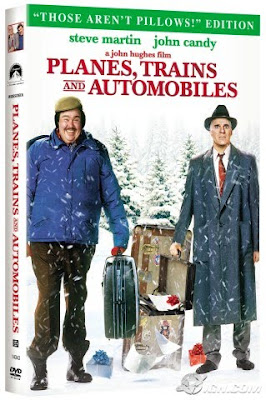 Have you seen this Steve Martin film, it's one of my favourites, about a man struggling through the snow to get home for Thanksgiving accompanied by a slobby John Candy with whom he is forced to share hotel bedrooms and various modes of transport.
This week Mr FF seems to have been living in his own version, it goes like this.
Mr FF was due to fly to Bratislava on Monday, the arrangement was that his boss would travel up from the north east of England, I would drive Mr FF to the motorway where they would meet up and both go off for meetings before travelling to Edinburgh airport for the flight. Mr FF would fly home later in the week via a meeting in London and I would collect him from Edinburgh airport on Thursday evening. His boss would fly back to Edinburgh on Friday and drive home to Co Durham.
By Sunday looking at the snow and the forecast it was obvious to me that I wouldn't be driving anywhere on Monday but Mr FF said we'd wait and see. On Monday morning he decided to get the bus to our local town and ask his boss to collect him, a little bit out of his way but needs must. I suggested Mr FF phone his boss to see if he was on time but Mr FF dismissed this saying he'd have heard if there was a problem, he set off in winter gear with his luggage to walk the mile to the bus stop. A little while later he was home, his boss hadn't been able to get the car out of the drive and was now on the train. So Mr FF dug out our drive and our little road and drove to the airport, which wasn't a big problem except that en route he got a message to say his flight was cancelled and when I'd checked on the net the airport was closed. When I spoke to him he was being turned away from the airport car park which was impassable. At this stage a lesser (more sensible) man would have given up, oh no, Mr FF said he was going to go into the airport to see if there were any other flights and he asked me to check on line for alternatives. The quickest route I could find took about 12.5 hours and there was still the minor detail of the airport being closed so he came home and his boss got another train back again, the Bratislava trip was off.
The snow kept falling, the airport remained closed but Mr FF booked himself on a flight on Wednesday to go down to London returning Thursday using the last leg of his Bratislava flights. Again he went to the airport, again it was closed, actually it has been closed all week only opening late last night. Might have been logical to come home but Mr FF left his car at the airport, got a bus into Edinburgh and found a train to London. The train left at 10.30, he had an interesting interlude when about 8 Geordie ladies boarded at Newcastle travelling to York who plied him with a giant home baked corned beef pie, plus wine, vodka, chocolate covered strawberries and the like. Unfortunately just before Doncaster the train broke down, the passengers were decanted onto the platform and told there'd be another one shortly. The next train was already full but eventually Mr FF found one that delivered him to Kings Cross at 7.30 that evening.
Unfortunately because of the weather his meeting had been cancelled. I spoke to him that night and said I was worried about him getting home on Thursday, he said it would be no problem as he'd already checked in on line, I did mention that he'd also need to get the **** airport open. Thursday he received a text message to say his flight had been brought forward by a couple of hours, he said the airline was probably consolidating flights but I said I couldn't imagine that would happen as Edinburgh airport was still closed. I'm not 100% sure what happened over the next half day but I received a message to say that he had misread the text and his flight had actually been changed from Thursday to Friday, it was 7.30 at night and could I find him somewhere to stay.
Have you heard the joke about the man who has to take a lorry load of bricks from the north to London. He gets to the big city, stops the vehicle and asks a passer by 'is this London' 'yes' is the reply 'OK' he says 'where do you want these bricks'. Hotel, London, hello. I did eventually get him into a Premier Inn after some heated discussion between us during which he complained about the price.
So Mr FF is due to fly home this afternoon, I've cleared our drive every day, I've kept the stove lit and we are well stocked with provisions even though I haven't been out for a week. The milkman has delivered, the coal man too, haven't seen the postie for a week and it's snowing.
I hope you and yours are where you want to be this weekend. I need to get that man to retire.
Post blog note @ 18.12 He is now home and managed to pick up some fresh veggies on the way. Phew.
Posted by Jennyff at 12:31 19 comments: