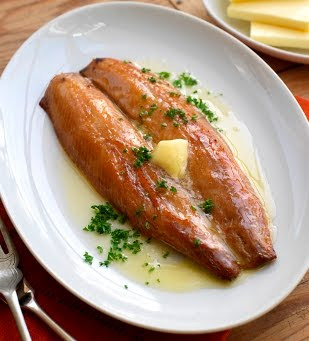 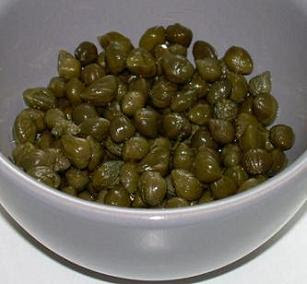 Mr FF was a bit confused at first but then pointed out that he was expecting a meal of smoked herring and not a dish of pickled buds in brine that is more of an ingredient, though he did congratulate the girl on her ingenuity and speed in finding something as obscure as capers.
The hotel didn't have any kippers and whilst he might have said in a Fawlty Towers way I'm an engineer and I want my kippers now, I expect he made do with a bit of toast.
Posted by Jennyff at 09:39 10 comments: 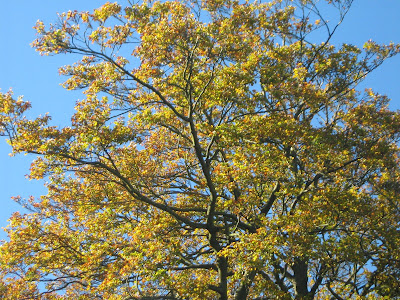 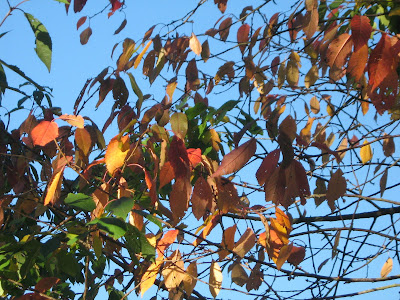 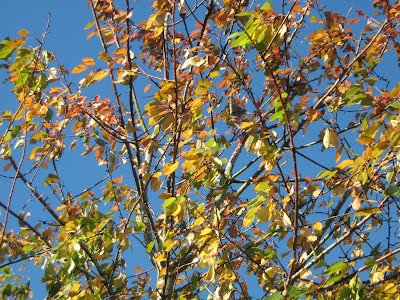 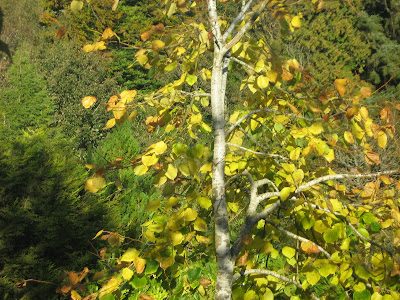 The autumn leaves are stunning this year, we've had lots of bright sunny days that display the changing colours perfectly. Mr FF and I spent the weekend chopping down and logging an unwanted tree in the garden, makes me feel so smug that the tree was a little cutting, filled the garden nicely until it got too large and now the wood is seasoning to keep us warm some future winter. 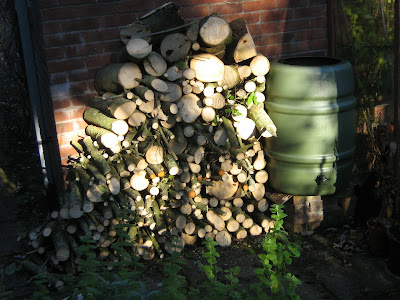 Lovely as all this is, somehow I can't settle into the season, you might think a girl who woke to this view from her bedroom window would be up and out there. 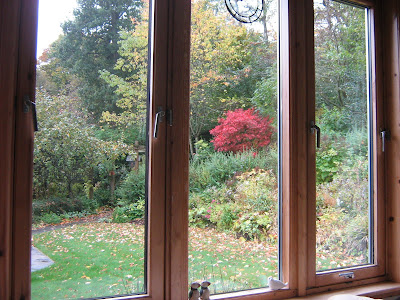 I should be clearing the tomatoes plants out of the greenhouse, planting bulbs, making my Christmas cake, enjoying lighting the stove in the afternoon, snuggling up, knitting, all those things but I'm so restless. 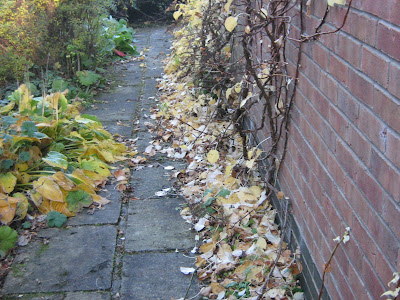 All I'm doing is sweeping up the fallen leaves to add to the compost and trying to keep the garden going just a big longer.
The season may be changing but I'm not adapting, I'm still in summer mode. Chatting to Mr FF yesterday we discovered we'd both been thinking about Palm Springs and how fantastic it would be to spend a couple of winter months there. If only. I must stop dreaming of flip flop days and come to terms with the fact I'm wearing socks and two woolly jumpers, but oh those golden sandals and painted toe nails speak to me more than a mountain of crispy fallen leaves ever will. 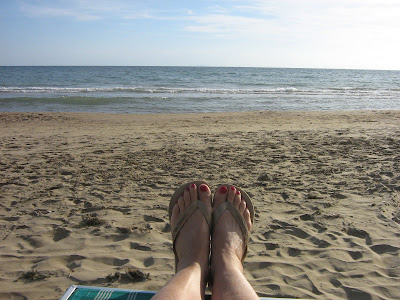 Knitting now (not a lot)

During and since our holiday my knitting seems to have really been badly neglected, which isn't good because I had planned to make several gifts and also start stocking up with gloves and scarves for my last market stall of the year in November. I shared a stall at the market just before we went away and did quite well, sold about £50 worth of items and got a couple of orders. 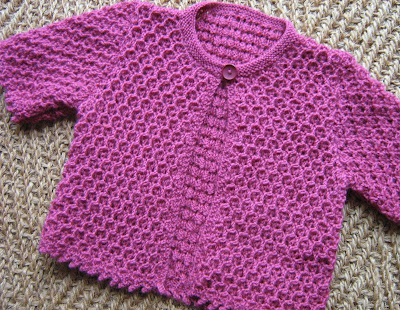 One finished item I have to show you is this little cardigan for Amelia's birthday, its from the Patons book Sugar and Spice. I knitted her a cotton version for the summer and Amelia's Mum was delighted so I hope she'll like this pure wool version. I also planned to knit her a fair isle cardy, I haven't started that and her birthday is next week. 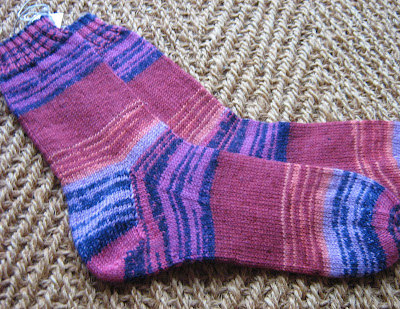 I also made a pair of socks in Wendy Happy, a predominantly bamboo yarn but this is a Christmas present. 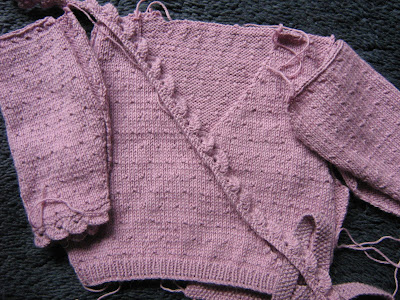 The little cardigan to be sent to London is finished but not sewn up, probably because that's the part I really don't like. 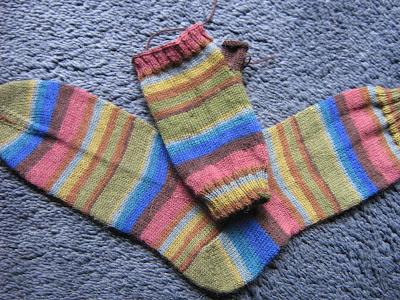 I got two orders for fingerless gloves from the market, I've made one glove so far which I think might be a bit big and I've started a pair of large socks for the next market as I never seem to have enough variety of sizes, I was asked for an 11 last time.
Not good is it, odd items, things to put together, I just don't know what's happened. I'm usually so strict with myself about finishing one item before starting the next, though I relax this rule to accommodate travel knitting hence the odd sock. Mr FF is out tonight, I'm telling myself I'll settle down to finish the cardigan and start the next sock or glove. I just hope I do.
Posted by Jennyff at 14:55 10 comments:

On one of our several non-working days Mr FF and I took a trip into the mountains above Subiaco. We were actually searching for a studio that had been designed by the father of one of Mr FF's architect friends, we think we found the location up a steep bumpy track but the entrance gate was locked. 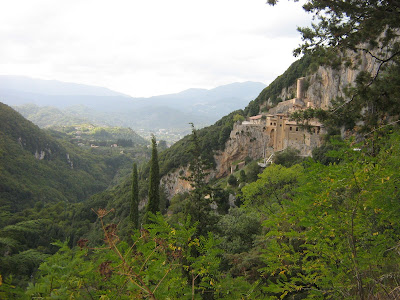 However we had a wonderful drive through the area that is home to a Benedictine community in the monasteries of Santa Scolastica and San Benedetto the latter housing Sacro Speco the cave where St Benedict lived as a hermit before forming the community. 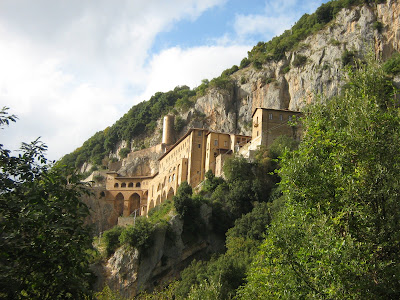 The monks offers hospitality and education to visitors, with accommodation for over 100 people, a restaurant, bar, library and a shop selling products like soap, jams and liqueurs. The area was pleasantly busy with people visiting the monastries, walking and cycling up the mountain. 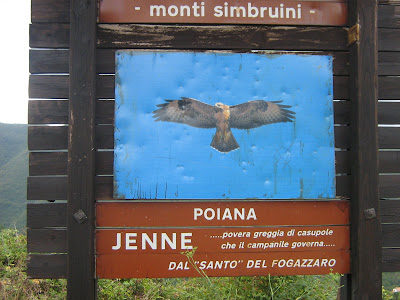 We drove up higher to the little town of Jenne, home to about 500 people it is perched on a plateau in the Parco Naturale Regionale Monti Simbruini with magnificent views all round and startling drops down into the valley below. 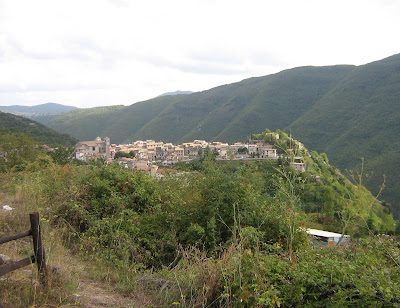 Such a treat for us to be out discovering our local area, there was a very spiritual atomosphere, calm and welcoming, definitely a place I'd like to visit again to spend more time discovering.
Posted by Jennyff at 10:11 10 comments:

We are home from Italy and finally the stove is finished, I can't tell you what a relief and delight that is.
We arrived at the airport in good time and began negotiations to get our extra large package into the hold. Firstly the check in girl said that we should have booked it in as sports equipment, probably because that costs more, and when we explained that it was a chimney flue she looked baffled. Eventually she took us down to the outsize luggage department who agreed it could fly but the package was too big to go onto the conveyor belt and therefore through the Xray machine. We had to take it somewhere else to be hand searched which was obviously too much effort because the man had a quick look and said it was OK. So far so good.
Did I mention that in my carry on case I had four cast iron replacement legs weighing 6.5 kilos for the stove. Of course I got pulled up at security, firstly they decided to check my liquids, a nail varnish and a lip balm, then they asked me about the stove legs. Again looks of incredulity, they said we probably couldn't take them on board but after consultation agreed that we could providing I took them out of my case and didn't put them in the overhead locker, fair enough they would certainly have knocked someone out if they fell. When we got on the plane we were in the emergency exit seats where you are not allowed to put anything on the floor so I called the stewardess and again explained about the stove legs. She said she thought we couldn't take them on board and went off to speak to the captain. She returned and said that the captain would keep them on the flight deck and we could reclaim them when we landed. Result. The whole crew turned out to see us when we disembarked and were delighted when we told them we also had 5 metres of flexible flue in the hold. 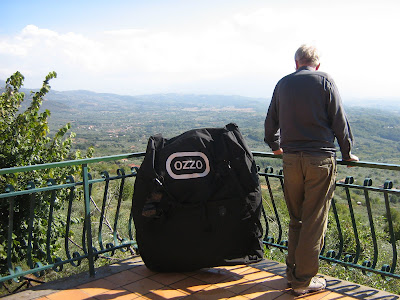 Good old Ryanair, after all I've said about you, thank you so much. 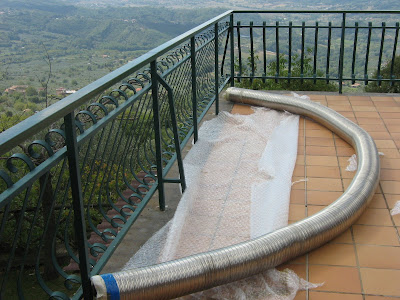 A few days of work, interspersed with trips to the beach and sadly trips to the tax office and bank, and the job was done. We had to lift the stove back off the hearth, which I didn't like, 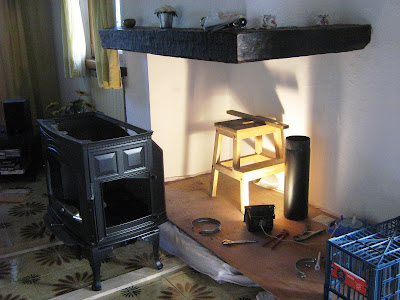 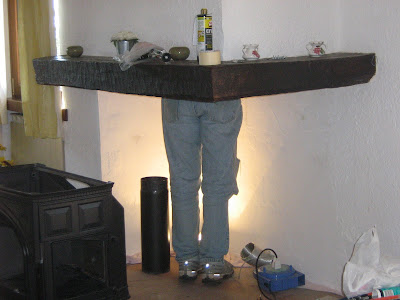 we wrapped the flexible flue in rock wool for insulation 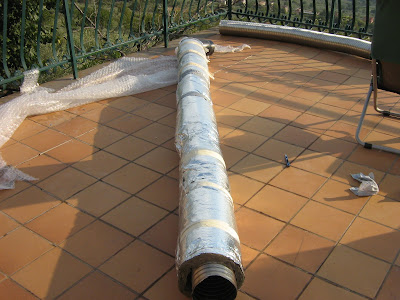 and then pushed it up from the room. I held it in position while Mr FF went onto the roof to secure it, not a nice sensation as I had to stand on tip toes right inside the chimney with all that weight but I managed. 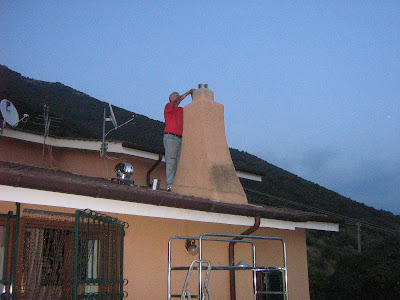 We did some more plastering to the wall, painted and connected the air intake. We didn't actually need the replacement legs as Mr FF was able to adjust the wobbly one, it seemed to have been overpacked. He phoned the suppliers and offered to take the second set back, I refused to run the gambit of Italian security so we will bring them home next time we travel by car. 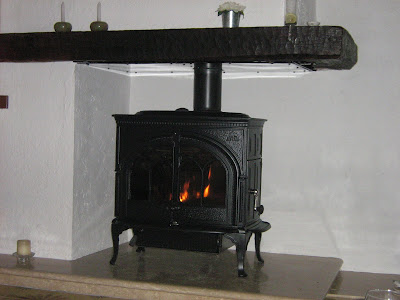 We lit the stove 7 days after we arrived and it worked beautifully, as a bonus we chopped up and burnt the wooden case and pallet that it had arrived in, the heat filtered nicely through the house and kept us cosy. Not a trace of smoke after all those years of being kippered by the open fire, wonderful.
Our Italian friends who came to look were full of admiration, someone asked if it had been worth the effort, it really has been hard work and at the moment there are still some bad memories to fade but they will.
Posted by Jennyff at 13:09 17 comments: