I believe we are not to call them ID cards though they are biometric, contain our cross and ugly photos, fingerprints, tax codes, passport numbers all of which can be used to identify us.  You may recall we applied for these mid January, an experience I’d rather forget, after which we kept checking the website to see if our applications had gone beyond the being processed stage.  A couple of weeks ago Mr FF reported that the cards were available and we would receive a message telling us when and where we could collect them.  We rather foolishly hoped this might be at our local police station rather than involve another trip to the police HQ in our provincial capital. Yes I know we’ve been spending time here for 20 years, we should know things never work in our favour.

We didn’t hear anything, Mr FF sent an email, ditto, ditto, after the third email we got a reply saying we didn’t need an appointment, we could turn up at the HQ any Tuesday or Thursday afternoon to collect the cards.   So last Thursday, with heavy hearts, we drove to the capital.  We arrived before they opened at 2.30,pm, there was already a queue.  At the main reception we were asked if we had an appointment.  When I said no and before I could explain we were told we didn’t need one we were given a piece of paper with 10 on it and simply told to go.    At the immigration office we waited outside for an hour, at least this time there was no snow, neither was there anywhere to sit and after calling in customer no 3 the staff gave up on the number system.  The electric sign wasn’t working, lit but constantly showing zero, so we were all left to sort ourselves out.  Several people did have appointments but that didn’t seem to make any difference.  We chatted to a lady from the Ukraine who said she’d been trying to renew her card since March and getting no where.  She was no 11 and processed at the window next to us.  I heard her say she couldn’t keep turning up every week but after much shouting by her and the staff she left no further forward.

It was the usual madness, our cards were in envelopes which could easily have been passed to the local police, we watched as they were opened and thrown away.   Some computer consultation, we were told to wait then passed to another staff member who took our index finger prints again, with much tutting and head shaking.  I think she wanted us to believe she was some forensic expert checking them against those they took in January, we didn’t.  Even to hand over 2 cards more paperwork was required but once the stapler came out I knew we were on the home straight.  Finally she practically threw our cards at us, we thanked her and left, almost 4 months later we were done.  I never want to go back there again.

Like everyone else at the immigration office we were treated appallingly from start to finish.   Old people, older than us, families with young children, everyone waiting outside for hours in all weathers, made to feel we were there for something to which we were not entitled. No organisation at all, why do the authority feel it’s acceptable for everyone to waste their time waiting, for everyone to travel to the capital rather than to one of the 91 local comune offices.  Yes that’s 91 town halls for half a million people,  Yorkshire 75% larger with a population of over 5 million has 39 and that includes city halls.  Here’s our local comune taken from their Facebook page, it has a staff of 40 serving a community of 3000. I suppose all these local offices provide employment but it’s a contrived tax payer funded economy of people pushing paper around, any benefits are cancelled by wasting the public’s time, unnecessary bureaucracy and the toll on my mental health. 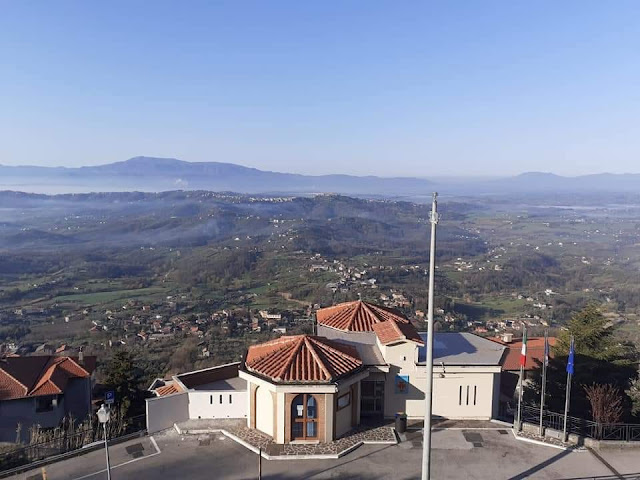 Since we applied for residency last year we received little help from the British Embassy, at one stage they admitted on their facebook page that Italian authorities  are not up to speed with post Brexit legislation so simply rejecting applications, which was our experience at both our comune and the health board.  Yet the Embassy doesn’t seem to do anything about this ridiculous situation so hundreds of people like us get stressed and angry while they try to comply with the regulations.  In total we’ve made 7 visits to 3 different offices, from walking distance to an hours drive away, nothing was done on line, no coordination between departments, even during the highest rates of covid infection and strict lockdown we were expected to turn up and queue.  Not one person behind the counters we visited was pleasant or helpful, we never received a smile or much of a greeting, we were shouted at often.

And you remember how immigration asked each of us to provide a 16 euro tax stamp with our application even though the information on their website when we applied did not mention this, other regions definitely did not require stamps and the embassy said we did not have to buy them.  Mr FF was on the case looking for answers and last week he got one. They said at the time we applied we did have to pay for stamps but then the law changed and they were no longer necessary.  They didn’t say when this change happened.