Song for the summer 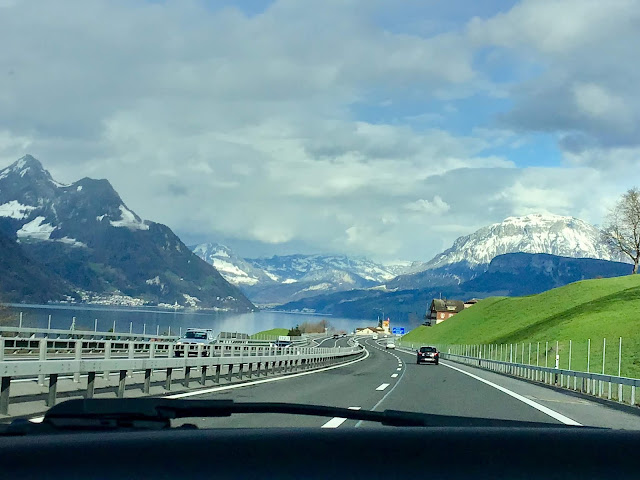 Every summer in Italy we have a special song. Generally it’s one we hear on the radio,  sometimes when we are driving out, sometimes after we arrive.  Sometimes it’s a song in English, sometimes not.  Whatever it is we mostly hear it in the car and we always sing along.  One year it was Coldplay’s Viva la Vida which I still love.
Our 2019 happy tune is George Ezra’s Shotgun, we heard it on the road to Dover and in our French hotel.
I’ll be riding shotgun
underneath a hot sun
feeling like a some one
knitting till the yarns done
I made that last line up but I did ride shotgun as Mr FFs drove us across Europe and I did knit and we  sang along and as you can see it was beautiful.

Grigio has hardly left my side since we were reunited, she is beside me now on the sofa, it’s delightful to have her here.  She is plumping up nicely and her coat is sleek and shiney after so much stroking.
This afternoon we, humans and cat, were post lunch enjoying the sun on our terrace when Enrico appeared.  He is the timid feral tiger stripe we fed last year.  He was hungry, took food and water then settled down on the terrace with us.  Grigio was pleased to see him, they rubbed noses in greeting.  Now she will have some cat company.
We’ve been working steadily in the garden and I have finally finished unpacking.   There is cleaning still to do but not while the sun shines, the temperatures are in the low 20s, a perfect spring.
Posted by Jennyff at 19:24 4 comments:

We arrived at our house around 6 last night and despite calling her and checking the garden until we went to bed there was no sign of our cat Grigio.  It was such a beautiful sunny morning that both of us were out tidying the garden after breakfast, ignoring the dust and unpacking in the house.  Around 11 Grigio arrived, a little thin but healthy and delighted to see is,  she hasn’t stopped chattering all day, except when she’s been eating.
Just before lunch Mario arrived and we thanked him lots for caring for Grigio but he had to tell us that her sister Crema had been killed on the road outside his house.  We’d worried for months about Grigio and whether we’d see her again, we never imagined Crema was at risk.  Mario told us he’d brought her back to our house where she was born and buried her in our orchard among the olive trees.
So while we are overjoyed to have Grigio here we are so sad for Crema and also as Mario told us his elderly ginger cat, who sometimes used to walk up to us and stay a day or so, had also died.
It was last year while we were in the UK that Crema decided to move down to Marios and she was well cared for there,  We used to see her quite often last summer, stopping for a cuddle if we were out walking past the house,  we will miss her as will Mario and his family.  She was a beautiful cat.
Grigio is beside me now on the sofa, it’s like we’ve never been apart though she hardly let’s me out of her sight,  don’t worry we are here for at least three months Brexit or not, and hopefully until the end of the year. 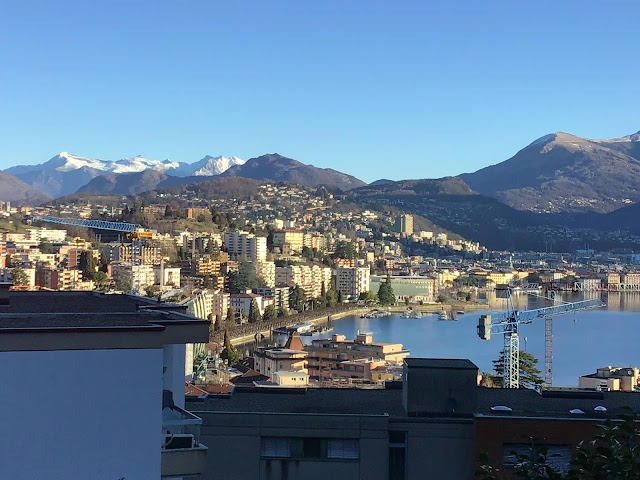 This is the view from our room, or should I say suite.  We got upgraded at our hotel from the economy room we booked to a suite with two balconies and a beautiful lounge.  I stayed up late last night it was so beautiful watching the lights in the town and on the mountains.  Mr FF had to go and lie down as our two course dinner, with one beer and one glass of wine, cost twice as much as we paid for the room.  He’s tried to recoup some of the expense by swimming a lot in the indoor pool.
Today it’s a long drive to our house but we are within spitting distance of Italy if not Lazio.

Why did we imagine it would be simple

A while back we made the application to our comune in Lazio to be allowed to stay long term in Italy and advised them when we intended to be in our house for the police to visit and check us out, part of the process.  We then delayed our departure by a few days and advised them of the new eta.  OK, good, everything in order ready to be finalised when we arrive.
This morning we got an email to say the police had been to visit us at the house there was no one there so they have scraped out application.
Give me strength.  Life is hard enough when we are preparing to change residences, all that packing and preparation, hotels to find, without this extra and totally unnecessary hassle.  Don't they read emails, do they enjoy the extra admin, they obviously relish winding us up.
Its dire outside today, after torrential rain we have major flooding in the town, the water was over the top of my boots when I crossed the main street and the ceiling in the chemist was about to fall in from roof leaks.  Now the road out of town is closed, the river has burst its banks.
Life just gets better and better and of course we are all much clearer now on what is happening with Brexit, not. At least we may still have time to reapply to stay before we leave the EU but Italy you are on a warning, sometimes you push me too far.
Posted by Jennyff at 19:48 1 comment:

Like many hundreds of people with property on the continent, Mr FF and I would like to be at our house in Italy before Brexit.  Not that we are deserting Yorkshire of course but if we are to leave the EU on 29 March it would make things easier for us to organise permission for long stays if were were still citizens of the EU when we did this.  We won't be any wiser about our situation than we are now until the parliamentary votes that are due to take place next week but we have tentative plans to leave for Italy next weekend.  Mr FF has organised the possibly necessary green card and international driving licence.  It could all be a waste of time but like others we are making provision.  Goodness knows what businesses are doing, the ports and customs, exporters, importers, we are all in the dark all hedging our bets and playing a waiting game.
We hope to stay in Italy for about 3 months and then come back to Yorkshire for a few weeks depending on the political situation.  2.5 years since we voted to leave the EU and its down to the wire.  No doubt the country will make its feelings clear about this madness when we have our next general election.
Nothing is booked but boxes of essentials are packed and clogging up the spare bedroom. I don't feel we have been back in Yorkshire very long but I know a little grey cat who might think otherwise.  We haven't had any news of Grigio for a while and the weather in Lazio has been awful, lets just hope she is still around and her sister Crema is still living with Mario.  Here they are as little kitties, bless their hearts. 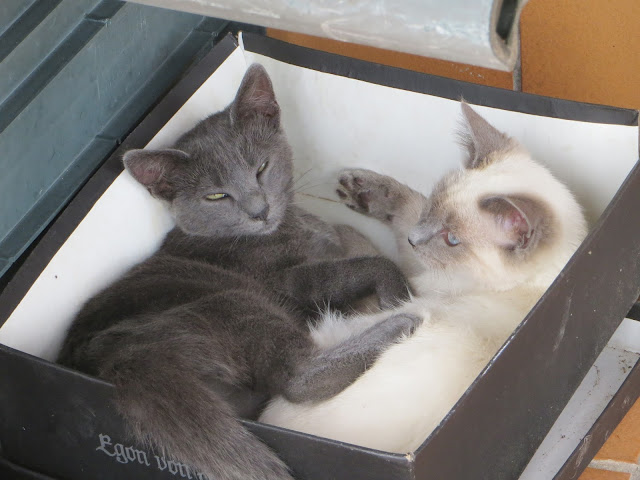