When we drove about half an hour away to the hospital for our vaccinations last week we had completed declarations giving our valid reason for movement, they would be required if we were stopped by the police.    With the documents we felt confident we could stay in the town after our appointments and we went into an almost deserted square where we bought takeaway coffee and pastries to enjoy sitting outside in the sun.   We hadn’t bought drinks since January when we had coffee and croissants standing beside the car after our tense visit to the police HQ to apply for our (still awaited) biometric cards.

Thursday was a beautiful day, the old buildings around the square looked gorgeous and we’d just been vaccinated, it was a simple pleasure we’d forgotten.  A lady with her daughter and presumably the grandmother walking by stopped to speak with us.  She lady lived in the town but had visited the U.K., been to Scotland and to York, we had a nice chat.   It was a sweet reminder of how open and friendly the Italian people are, we’ve missed this contact. 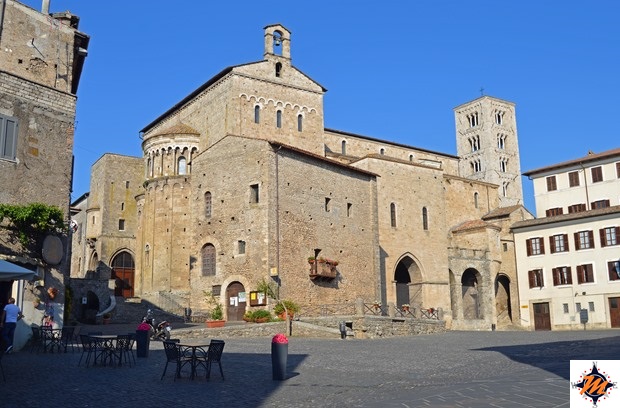 The square in happier times, no tables and chairs outside the bar during lockdown, photo from the internet

Living in isolation has been fine, it hasn’t bothered us, we’ve kept busy but getting out and just embracing the everyday culture is so much better.  We’ve probably got bogged down with our own little battles and frustrations,  we have forgotten why we came here in the first place.  We meet a few people on our walks but generally it’s a just a greeting as we pass.  We stopped for wine on the way home, usually we both go into the cantina and chat with the family, since Covid I wait in the car and Mr FF is served in silence, we are no longer relaxed with each other.  Thursday we had proper conversations at the hospital and in the square with strangers who were genuinely kind and generous with their good wishes.  In these difficult times we’ve all been busy looking after ourselves, keeping safe, keeping quiet, hiding our smiles behind a mask.  Maybe it would make a difference if we show a little more concern for the well-being of others, maybe it is safe to talk, within the rules, to those we know and also strangers we will never meet again.  I am going to try to offer a little kindness to people I encounter, next time I do encounter other people, in the hope it might make me and them feel slightly more normal, a feeling that is long overdue.

I’m in no position to give a master class on garden pruning but I am going to rant about bad pruning and how destructive it is.  Let’s face it nature doesn’t prune, it’s something introduced hopefully to improve on nature, but not always.

I prune cautiously and if I don’t know what to do I find out.  I’ve been almost reduced to tears when I’ve see some of the damage done by the so called gardener who looks after our communal grounds back in the U.K.  He mainly works with a hedge trimmer, has no idea about taking out old wood, dead wood, wood that has flowered or making space.  At any time of year he shapes round shrubs, well often he makes them square which I detest, or cuts them to the ground.  Last year in about an hour he destroyed at least £100 worth of established pieris, beautiful evergreen shrubs that I was so pleased to find in our garden.

Here in Italy things grow quicker and bigger.  In many of the little towns and villages main roads are lined with an Avenue trees and every year it’s a major traffic stopping operation to cut them back.   The trees have been heavily pollarded until they have become tortured and ugly as you can see here, the photo from the internet is of a town not so far away but our village street looks identical but not flat. 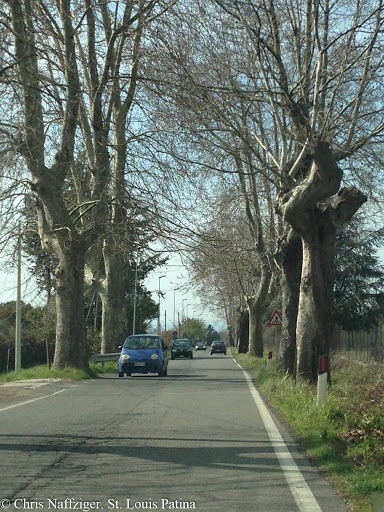 I don’t think it’s ever crossed anyone’s mind that this annual expensive exercise which is taking place now could be avoided by replacing the gnarled old trees with ones that are suitably sized and enhance the street scene.

A neighbour here every year engages another so called gardener to trim his hedges and shape his conifers, they are so sharp you could cut yourself on the edges.  You can call it topiary, I call it vandalism. All the work and money goes into this cutting and trimming, the rest of the sizeable garden is abandoned and colourless. 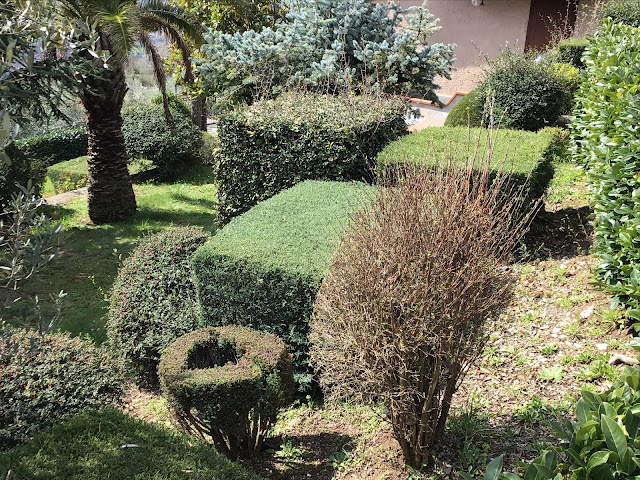 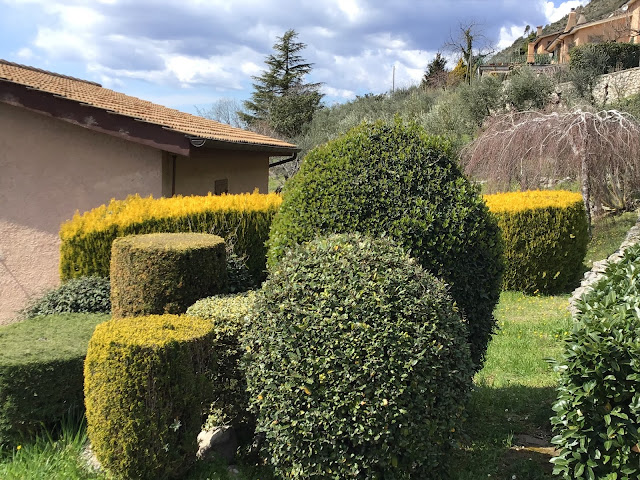 Monty Don caused controversy recently when he suggested we reduce lawn cutting, which he considers unnecessary as well as bad for the environment citing it a controlling exercise.  I’d say the same about pruning and shaping, it’s over grooming and creates a useless habitat for nature.   During lockdown with hairdressers closed we’ve got used to unkempt and wild hair, maybe we can take this more natural approach to our gardens too, let them flourish and fill with wildlife, which we don’t actually want to happen to our hair.

My usual post breakfast walk round the policies this morning revealed a scene of devastation. 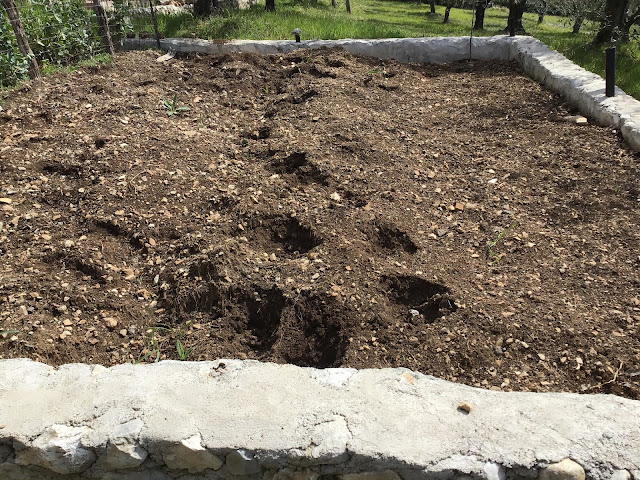 From a distance I could see the vegetable plot was completely churned up, on closer inspection I realised it was horses.  Why they would want to climb the little wall and wander about in bare soil I have no idea.  Fortunately they hadn’t trodden on the broad beans that are just coming through or eaten the ones planted last year that are flowering. 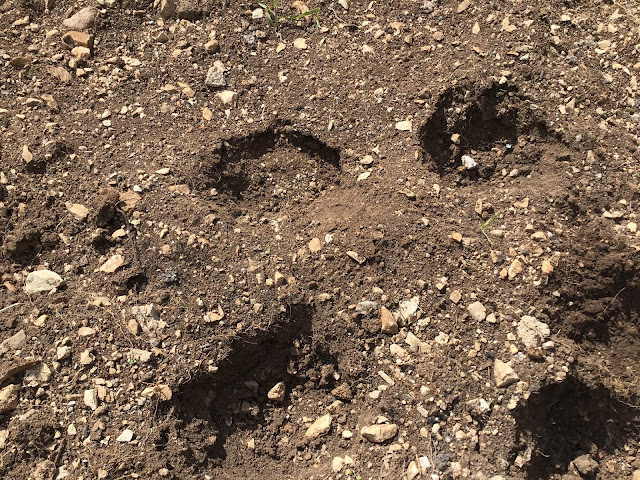 As usual they left plenty of manure, I didn’t photograph that, so I wasn’t too cross until I went round to the wild garden I have started.  Plants pulled out of the ground or trodden down and destroyed, more manure.  I’ve had a go at sorting it out, the plants I’ve lost were just cuttings and divisions that I hoped would add a little interest in the orchard but I’m still cross. At the side of our orchard between our land and the neighbours fence is a watercourse that hardly ever runs but the land belongs to the comune and has to be left open.  I’ve planted a few iris along the sides of the dry stream.  At the top where the water flows under the road we have netting that can easily be opened if anyone wants access, a lady with her dog walked down the other day giving me a wave and leaving everything as she found it.  At the bottom there is no barrier to the olive groves below us and that is how the horses get in, sneakily they come at night.  Mr FF is going to find netting for that opening before the tomato season starts.
Posted by Jennyff at 14:51 5 comments:

Red again and a little blue

Last week our part of Lazio went from the lowest to the highest zone for covid restrictions, from tomorrow the whole of Lazio will be in this red zone until after Easter.  It’s hard to know exactly what the rules are, saying you should stay close to your home is open to interpretation.  It makes little difference to us as we live in isolation and shop for food once a week.  However the ongoing restrictions are illogically weighing on my mind.  I think we have convinced ourselves that spring is here and things will get better not worse, I tell myself to sit it out that little bit longer.  We have no need to return to the U.K., it doesn’t matter much if we cannot register our car with Italian plates for now and we will get our vaccines home or away.  In fact NHS phoned only last week to check that we are still abroad, that we will have the vaccines and tell us who we should phone to do so.  I am most impressed.

Mr FF continues his work in the garage, it’s impossible to be dust free though I shouldn’t worry too much about that as no one can come into our house to see it. Saturday we had the big unveil, the grotto is dismantled, the clean up has started.  The pipes will be boxed in and incorporated into storage. 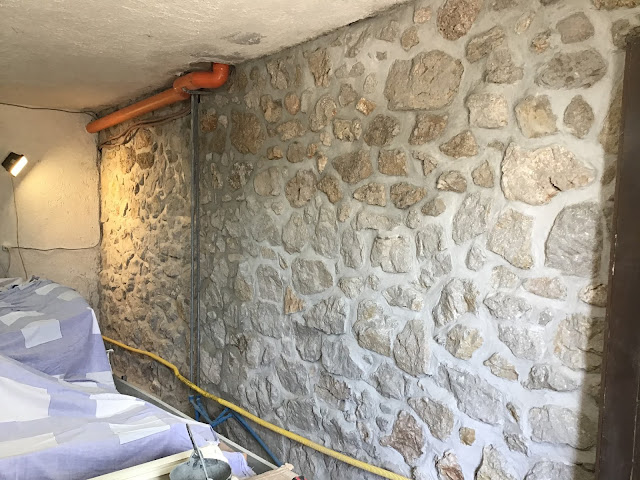 The news last week was sad and depressing, not just the ever rising infection rates in Italy.   Ms Markle and her accusations, no I didn’t watch the interview, a young English woman walking home abducted and murdered by a policeman, the latter event putting the petulance of the former into context. Unilever are no longer to use the word normal to describe their toiletries, don’t ask me I am too old for this correctness.   Life as we know it, I think I’m allowed to be a little down at times but I soldier on.  Spring officially arrives on the mountainside in a week according to our friend Antonio, I can’t wait though actually I think it’s already here and it’s beautiful. 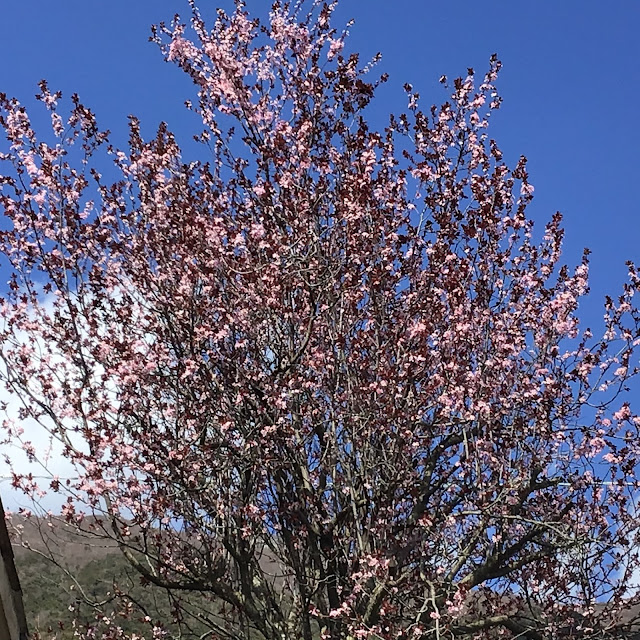 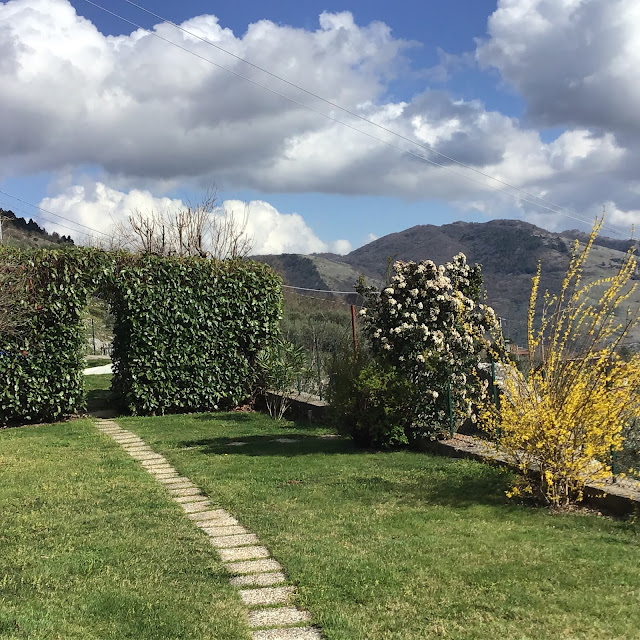 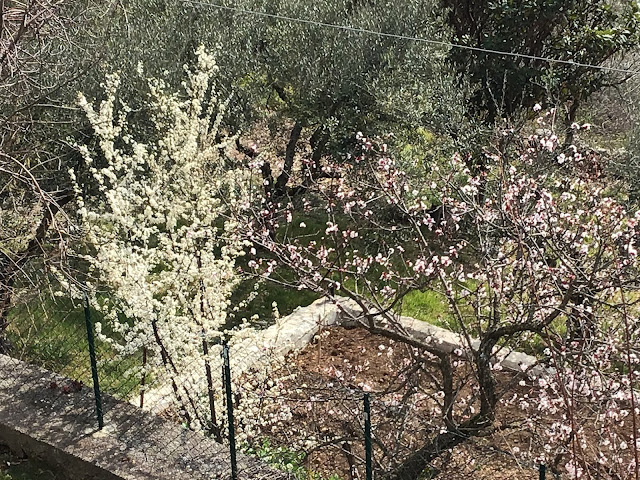 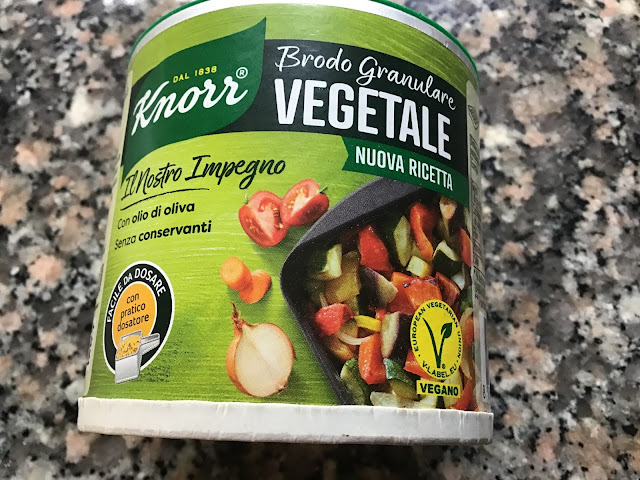 I bought a tub of vegetable stock the other week.  I prefer the loose powder to individually foil wrapped, oddly squishy cubes, at home I buy Marigold organic bouillon powder.  When I opened this Knorr product there was inside a miniature  scoop, the same size as a stock cube.  How clever is that, brilliant.  I hadn’t read the small print but it actually says on the carton con practico dosatore, with practical dispenser, molto practico indeed. 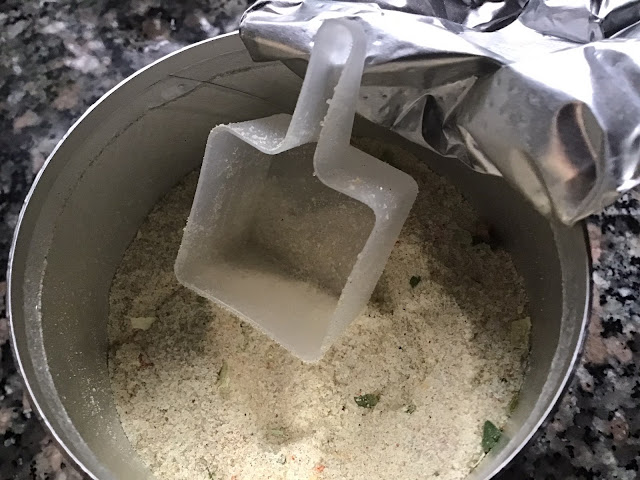 I can’t tell you how much I love this idea, the scoop is tiny, like something from a dolls tea service.   I shall buy another tub so I have a scoop to bring home as I’m not sure if this product is available in the U.K. or of a scoop is included. How did I get to 72 without one of these essential pieces of kitchenalia.
Posted by Jennyff at 10:25 5 comments:

For my next trick

We woke this morning about 6 am to what sounded like a door swinging open.  We both lay in a daze for a while as you do when woken abruptly.  I took a look at our bedroom door, last week Grigio had managed to climb up our dressing gowns hung on the back and was balanced on the top edge of the door.  Mr FF lifted her down. This time she must have climbed up the same way and launched herself from the door edge onto the top of our wardrobe, which is high, the photo was taken from our bed. 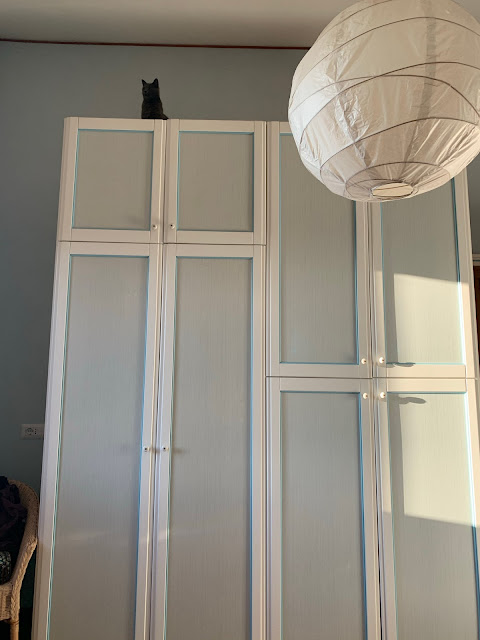 We left her there for a while, when she got restless Mr FF went for the small steps but she wouldn’t come to him so we ignored her again though more sleep was impossible.  Then she started preparing herself for a launch, presumably onto our bed with the possibility of landing on the tiled floor. He went for the proper stepladder and got her down, she was so pleased with herself purring and parading around.

Her love of heights is worrying, Grigio is ingenious at getting into precarious places and it never crosses her mind how she will get down again.