We arrived at our house in Lazio Friday evening and spent a few days unpacking the car,  knocking down the cobwebs and felling the knee high lawn.  Everything is beautifully green after an exceptionally wet spring,  there is a lot of blossom on the trees, many wild flowers and the cuckoo is around.  The sun shines every day, our white limbs are on display and we are back to our outdoor life.
There had been no sign of the cats for the first few days, despite much calling, though Mario said the Grigio was still being fed at his house but going off until the next meal, so we didn’t see her when we called in as we arrived.   Then this morning I saw Grigio walk past the kitchen window, she had plenty to say to us.  We were all delighted to see each other and we thought she was pretty smart realising we were back and walking the half mile or so from Marios.
Mid morning Mario arrived and we showed him Grigio but he said that wasn’t the cat living at his house and he hadn’t seen this one for a long time. So we went down to Marios and after some calling Crema appeared, obviously the two names and colours had been confused.  Mario insisted we bring Crema back in his car, she wasn’t at all happy and neither was I so I decided to walk back leaving the men in the car with a rampaging cat.  Once home Crema took refuge under our car for a while, disappeared, reappeared, spat at her long lost sister and generally took offence.  Grigio on the other hand is adorable, still lots to say, following us around in case we take off again and has slipped back into her previous life.  She is stretched out beside me on the sofa as I type.
I hope Crema comes round, if she does decide to go back to Marios we will respect her choice but we really want her to stay.  We are so happy to see the two kitties alive and well, four days of travelling, four days of waiting and finally we are reunited.
Posted by Jennyff at 15:00 3 comments:

Finally we are moving back to our other life.  We leave for Lazio soon, I won't tell you exactly when in case Mark Zukerberg broadcasts this to the world.
I haven't started my clothes packing yet, which is an ordeal in itself, but I have sorted out all the other bits and pieces I've sourced while we've been in the UK.  Survival essentials like Yorkshire Tea of course, muesli, you can't get a decent muesli in Italy and whilst I can't take enough for 6 months its nice to have a pack or two to eek out.  Why did I think those lanterns, much reduced as a local interiors shop was having a refurb, would be easy to transport.  They are pretty and will be great in our revamped Italian garden, but packing them safely is a challenge.  The sparkly flameless candles are lovely too, battery operated, again for the garden and in the Laura Ashley sale. 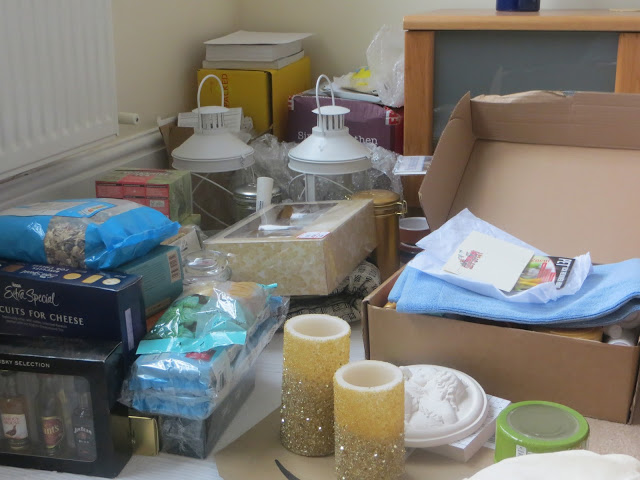 Lots of gifts to take, everyone wants Cheddar cheese, biscuits, UK magazines.
Whilst in Italy I make a list of what we will need for the following year,  toiletries because I like my regular brands, new bed linen, books, but back in the UK I start to doubt myself. Does it mean because I haven't included shower gels that we have enough or did I just forget, best pop in one or two just in case.  Not sure how much sock yarn I left in the house so best to take lots.
Mr FF has got himself a new iPad and has been collecting various IT related items in the hope that we can get some UK telly again, at least when the temperature cools and we stop sitting outside until midnight.
I'm also taking cat worming tablets, which we can never find in Italy, just in case those little kitties reappear, fingers cross.
Sitting here in socks and jumper with rain hitting against the windows its hard to believe we shall be in the sunshine soon, once we get over the channel I can forget about warm clothing for many months, I can't wait.
A presto Lazio.
Posted by Jennyff at 11:57 3 comments: