A wet day in Lazio

Beautiful nonetheless
It’s not autumnal yet but high summer has passed.  We are still using the pool,  probably not for much longer.  The garden is happy, the irrigation is turned off.
Posted by Jennyff at 16:49 4 comments:

I despair when I see blatant examples of business ignoring the need to reduce waste while you and I do our best to make a difference. 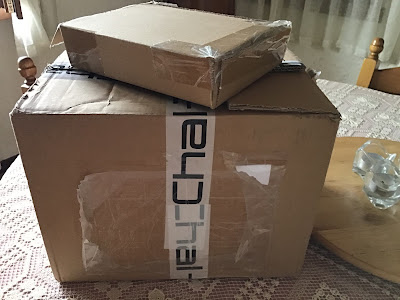 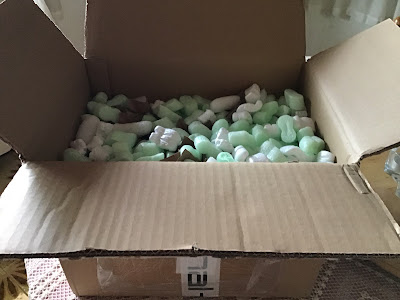 Mr FF received a parcel today that came to us in Italy from Berlin.  The item inside the box, itself in a box,  was small as you can see, the rest of the box was full of pieces of polystyrene.  The small box contained a replacement solar panel for our garden fountain.  Admittedly the panel is somewhat fragile but the intention of using solar power and sourcing just a new panel rather than a complete new fountain is cancelled by the excessive packaging,  I shall keep the polystyrene and use it in the bottom of a large plant pot to reduce the amount of compost I use and therefore the weight, probably for annuals that won’t have deep roots.  The supplier obviously doesn’t care what happens to the polystyrene. 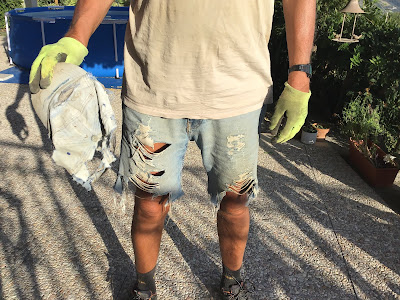 Mass on the mountain

Last Sunday we made our way to the top of our mountain, 1420 metres above sea level, to join the celebrations beneath the statue of the queen of peace. 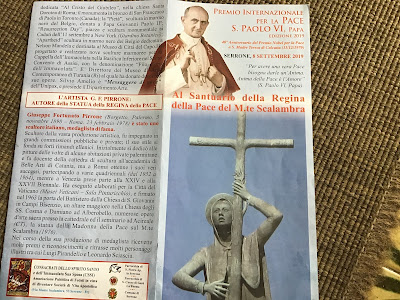 We were able to drive almost to the summit, the man who directed us to the car park seemed to know us and said we could either walk the final stretch on the road or take the shorter mountain path.  No guesses which one Mr FF selected, it was rough, steep and unclear but my main concern was that we would suddenly emerge from the woods behind the altar amongst the 7 officiating priests, we didn’t.
After the mass there were talks, presentations and finally around 7 pm we were lead by the local band to the statue where rose buds were laid and prayers said with the most beautiful background of a setting sun and distant mountains. 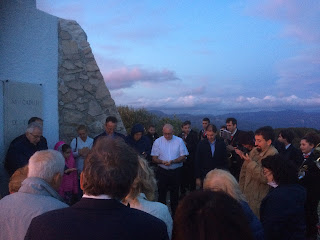 If you say it loud enough

We took part yesterday in a village church event,  I’ll post more details soon.  As on similar occasions we’ve attended it seemed acceptable to wander in and out of the venue, let your phone ring and to chat quietly during proceedings so it wasn’t too surprising when a young boy,  about 10, tapped Mr FF on the shoulder and asked if we were English.  He seemed delighted that we were and confirmed this to the friend who appeared beside him.
They obviously wanted to practice what they knew, starting off with hello, they proceeded to do you like pasta, a few things we didn’t understand and they told us their names, all with huge smiles on their handsome little faces.  I asked them if they knew the children of some of our friends, yes they did and asked me how to say best, they were best friends.  The conversation turned to them asking me how to say various things until they had me stuck at supercalafragelisticexpialidocious.  It’s the same I said, e lo stresso, we say supercalafragelisticexpialidocious too.  Yes they said, but how do you say it in English.
Posted by Jennyff at 08:48 1 comment: 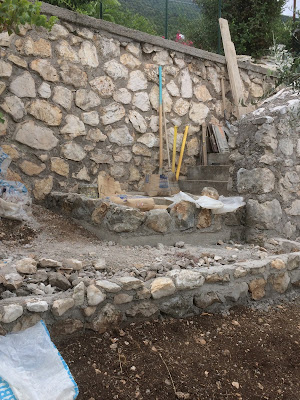 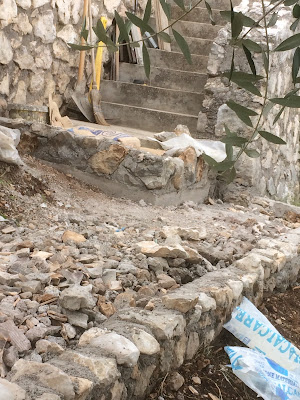 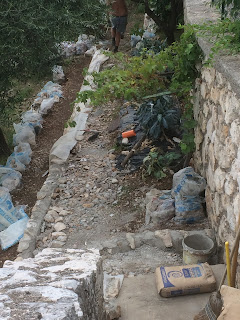 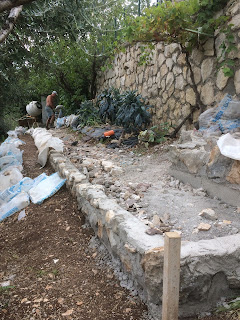 Now the terrace is finished Mr FF is constructing a new path in our orchard.  The ground there slopes and it’s always difficult for me getting to the veggie department in my flip flops so a flat path will be great.  It’s also a good way of getting rid of the remaining rubble, currently in bags, from when we renewed the front garden paths, we waste nothing.
The little stone retaining wall is sweet and much in keeping with the large wall.  Mr FF is becoming quite skilled at this type of work, who knows he may have missed out on a brilliant career as a bricklayer.
Posted by Jennyff at 18:07 4 comments: