Two tappas and another tumble

Last Saturday we travelled into the Abruzzo to watch a Giro stage finish. We had a spectacular 3 hour drive over the mountains, reaching at the top of the pass a sign that said the road was closed. Obviously Mr FF knew better, drove round the barrier and past piles of snow at the roadside. I was a bit reassured to see a family picnicking as we travelled down, then to see a car coming in the opposite direction. I know it might have been travelling the same way as us and had to turn round but somehow it was a comfort. We eventually reached our destination, a little hilltop village where we had to park On the approach road and walk but we had our own picnic and plenty of time. The usual Giro circus filled the tiny streets and the place was full of people and noise. We found a great viewing position, uncomfortably between the barriers for the cyclists and the road crash barriers before a steep drop but we were able to see the riders approach below and then again as they came out of a sharp bend and accelerated past us to the finish not far away. Wonderful, exciting cycling, a great if long day. Monday the Giro came to Lazio and we had less than an hours drive to the finish. Just as well we arrived early and I refused Mr FFs offer of a tour of the (closed naturally) fashion shops as I was keen to get into position. Despite checking the road name on the net and on the tv, the one given was completely wrong. We walked the full length of Viale Roma and not a sign of the event. Fortunately the men we asked knew where we needed to be, miles away, but we got there, parked and found a spot 400 metres from the finish on a bend not right at the front of the barriers but not too far back. The usual excitement as the various support cars and motor bikes arrived horns sounding and lights flashing. A few of the motorbikes nearly didnt take the bend which was a bit worrying. Then the helicopters were overhead, always a sign the riders are coming. The boys in Lycra streamed towards us and suddenly one went down right in front of us, he,d touched his brakes, gone down and taken out the sprint race leader, Matt Goss, who lay on the road before us and Mark Cavendish had to take evasive action ruining his run up to the finish. A big crowd built up round us but I was too upset to look at the poor guy in the road and distraught that the officials had made the finish so dangerous. Eventually Matt Goss was able to stand up and get back on his bike looking pale and shocked, we gave him a huge round of applause. The boy who caused the incident, he had been the stage winner the previous day, broke his wrist and withdrew from the race. So I really didn't see much of the event and had no idea who won the stage till we got home. That was our last chance to see live racing as the Giro moved into Umbria. Today I watched the stage on tv and saw the rider who took Mark Cavendish down in an earlier stage take the sprint to win. As Cav said afterwards the guy did a great sprint but shouldnt even be in the race after his dangerous behaviour Again there was a bend just before the final few hundred metres, again riders went down. So much as I love the Giro it hasnt been quite so wonderful this year, thrills and spills but I really could do without the latter. Otherwise the weather is lovely, the garden is looking great, Mr FF is painting radiators and my brother and his wife arrive in Sunday for a week which means trips out and gelato, with tv Giro highlights in the evening.
Posted by Jennyff at 18:51 3 comments:

Yes, we are off to Italy again.  Packing a small carry on case to last me three weeks, trying to include more going out clothes and less work wear as we have no big project planned for this visit.  Sock yarn is selected, paperbacks picked. 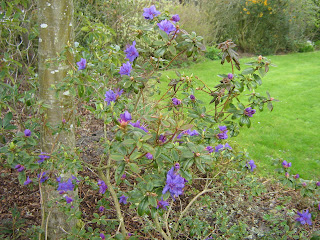 Meantime, I've been working really hard in my Scottish garden, I have to say it's looking the best I've ever seen it so I'm a little reluctant to miss the spring activity but then I'm wondering about the sunflower and herb seeds I planted in Lazio.   I did think I would l grow less this year in Scotland but it seemed wrong to leave the veggie patch empty so I have planted potatoes, beans and peas, and what would a garden be without sweet peas, then there are the herbs and hanging baskets. 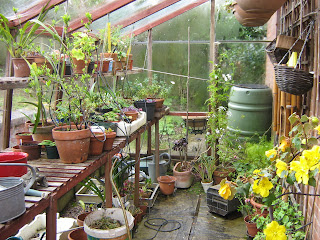 The automatic watering system is set in the greenhouse, I got drenched this morning checking that all the pots were getting a drink. 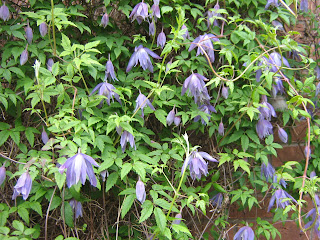