I've always been a saver 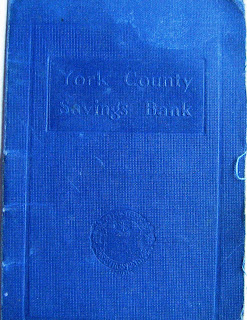 On 08 January 1949, a couple of months after I was born my parents opened a savings account for me at our local bank. 60 years later I still have my pass book though the account has been closed for a long time. When I was born it was customary on meeting a new baby for the first time to 'cross its palm with silver' which usually meant slipping a half crown (just over 12p in today's money) briefly into the baby's fist before handing it to the parents. My account was opened with £8.10s.0d (that's eight pounds ten shillings or £8.50) which was actually quite a lot of money in those days so I did quite well. 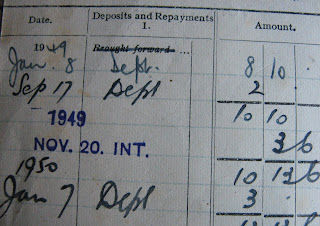 There is a pattern of money being paid into my account around New Year, I imagine that was money given to me both for my birthday in November and for Christmas. My brother had an account too and neither of us was allowed to keep our bank book, it lived in my father's desk where all the bills and business papers went. 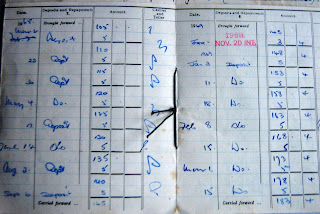 When I started work at 18 I was given my book and I started saving regularly. In 1966 my first wage just over £8 per week, paid fortnightly and despite having to pay bus fares and a contribution at home towards my upkeep I started putting money into my account after each pay day. This meant a Saturday morning trip into the local town where I'd queue to hand over my cash and have the teller enter the money neatly into my book, always with a fountain pen. I must have had a rise because a year after starting work I was regularly saving £5 every other week.
I was never going to make my fortune putting money away like this and there was never any intention to draw cash out for things I 'needed' but it gave me a great sense of security to have something put by and established a life long saving pattern.
I stopped paying into the savings bank in 1970 when I got married, Mr FF and I opened a joint building society account, though my old account remained open and a couple of pounds of interest was added each year until eventually the bank was taken over by TSB in the early 80s. I asked if I could have my pass book back and have kept it ever since, I treasure it as a record of my life and I love the picture of the actual branch inside the front cover. 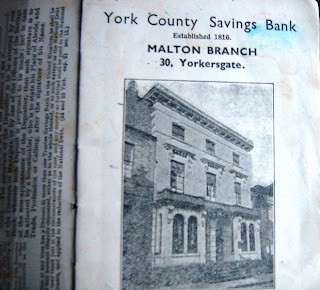 I was reminded of my book recently when I transferred some money from one of the failed Icelandic accounts into the Halifax. I sent off a cheque with two ISA certificates in December, approximately 50% of the cheque was paid into my Halifax account before Christmas, the other half didn't appear until mid January. I received three different certificates from the Halifax confirming the amount in my account, only one was correct in fact one showed about £3,500 more than I actually had. During this time I telephoned regularly as my money seemed to be somewhere in the ether, went through the usual frustrations of call centre waiting, explaining everything to a new person each time and getting fobbed off with nonsense. Eventually I made a complaint in writing and whilst I received £20 compensation for the phone calls they still don't seem to have grasped what the problem was and I am now waiting to hear back, my phone call from last Friday still hasn't been returned. I can't help thinking (call me old fashioned) that my lovely pass book, meeting the cashier face to face and handing over money was a much more satisfactory method of banking. In those days the bank was a revered institution, how times have changed.
Posted by Jennyff at 13:14