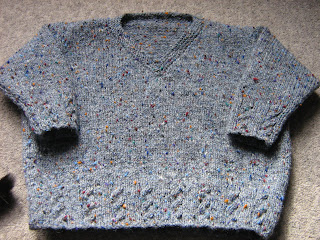 I knitted this for Phoebe from Louise Harding's Miss Bea's Rainy Day, a beautiful little book of Rowan children's patterns that makes most of my younger friends want to start a family straight away. I used Jaeger Matchmaker Twill DK pure wool in a lovely shade of bluey gray with flecks of red, orange, purple, turquoise and green. I initially thought the wool, which I was given a while ago, was a bit dull but seeing it in daylight the tweed effect makes it interesting and lively so I'm glad I didn't embark on a complicated pattern, there's just a bit of cable at the rib.
Phoebe is my virtual niece, the daughter of my youngest brother's ex wife, Heidi and her new partner. Fortunately for me Heidi has always kept in touch, remembered my birthday and included me in Phoebe's life. She is almost three now and because we have never met (I hope one day we will) knitting for Phoebe has been a stab in the dark, but accommodatingly she has fitted into everything I have sent and been excited about the parcels. The photograph I got back when she received her little Opal socks was a delight, no one could fake that enthusiasm. Phoebe is adorable, a proper little country girl growing up in Yorkshire with horses and dogs. I hope she enjoys wearing her sweater and its fine by me if she does so feeding, mucking out or whatever animal duties she joins in with, though I may surprise her next time with something pink and girly.
Posted by Jennyff at 21:15