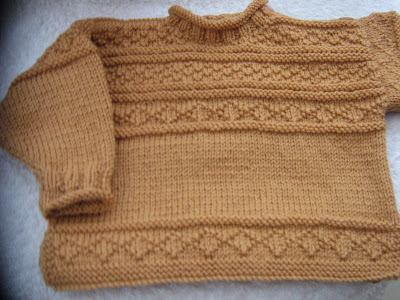 My first completed item for the new year, it has already been posted to Rudy in London. He was born last September, the son of Mr FF's nephew, which I suppose makes us great aunt and uncle, but I don't want to dwell on that. The pattern is from an old Rowan magazine, the yarn Jaegar Matchmaker pure dk. It's a jumper I've made many times for babies, in fact I probably first knit it for Hector who is now a handsome and charming teenager. I like to think the handknits gave him a good start in life and contributed to him turning out so well. We had a visitor to our office last week, Matthew, who was only 5 days old and snuggled under a beautiful colourful handknit blanket and into a wonderful little stripy cardigan. The handknits can't take credit for him being such a beautiful baby, but maybe he was such a contended one because of them.
Mr FF is a devotee of the handknit and announced only last week that he hadn't worn a 'bought' jumper for a long time. He still wears one sweater I knitted him over 30 years ago. It's Herdwick wool that I bought in the Lake District on a cone, the wool was quite oily giving it a good sheepy smell and it still turns the water after many many washes. In fact Mr FF wears it when he's out with his walking group and when they put on the latest in insulating, wind and waterproof expensive fabrics, he presses on in his woolly jumper, snug and smug.
I'm currently knitting him a plain raglan sleeved round neck in graphite pure wool dk from New Lanark, the yarn is produced there on a 19th century spinning mule using traditional methods. Cleo however seems to think I'm knitting her a new petbed, but thats OK most things I produce have a few cat hairs knitted in, it just adds to the thermal value and I tell people its very lucky. 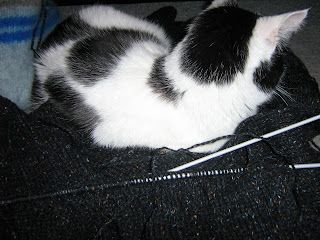