So here we are in 2022 wondering what day it is and how to shed those extra pounds while the shops keep reducing mince pies and I keep buying them.

Our lovely presents have been packed away.  I can hardly remember what I put in MrFF’s £5 stocking but apparently there was a pair of socks knitted from gifted yarn £0, a lovely pure alpaca scarf that I found for £2 and might ask him to share, some reduced garden twine 99p, an organic cotton t shirt that was part of a bundle I bought as gifts so I am counting as almost free and a garden sign in the form of rusty metal map of the UK which was £3.  I did slightly overspend but if we share the scarf it’s about right.

New year was our usual night in with beautiful fireworks which we viewed from the balcony at midnight.  It was so mild we stood outside for almost half an hour, in fact we haven’t had our central heating on for a week now as our penthouse is a constant 20 degrees.   We benefit from heating on the lower floors, our double glazing and extra loft insulation.  Smug, yes I am.

From Italy we’ve had good and bad news, don’t worry the cats are fine.  On New Year’s Day we had this photo from Mario, there they are both together, Enrico patiently waiting for his turn to eat which Grigio tucks in. 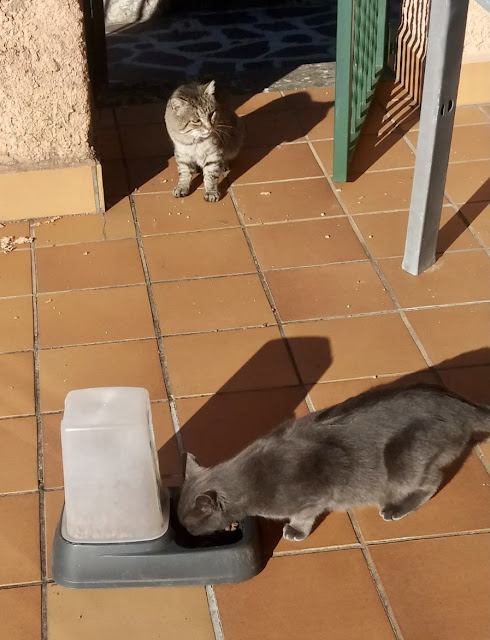 Bad news was that before Christmas we wanted to transfer some money but found our Italian bank account had been blocked because of fraudulent activity.  It isn’t the first time this has happened, they simply stop the account without letting us know and because we are back in the UK it’s been difficult to resolve.  We tried the automated telephone push button procedure which eventually and regularly said our access code was correct, then said it was wrong and cut us off.  We contacted our branch several times, they ignored us, we contacted customer services, they said go through button pushing exercise which we said didn’t work, they said contact the branch, we said they weren’t responding.  We made several attempts with customer services but always got the same answer, do the things that don’t work.

Finally MrFF made an official complaint, someone phoned from Milan and said he’d have to transfer the call to someone else, so why did he bother to ring.  After an hour and a quarter waiting to be transferred the call disconnected.   It’s infuriating, not only have they blocked our account and refused to sort it, they continue to charge us 14 euro a month not to be able to access our money.  We have been with Unicredit for 20 years and they have always been hopeless, it’s time to find another euro bank.

Normality is returning though I have yet to take down the decorations which this year I want to keep as long as possible.  Despite all the problems, our own little niggles, the pandemic etc I have loved this Christmas time, I continue to be delighted and grateful to be here, to hope for better times and look forward to seeing the kitties again.