Probably my biggest rant to date

As we became Italian residents at the end of last year we can apply for the new biometric cards that came into effect this year.   We are not quite sure if they are ID cards or permission to stay cards or residency cards but it seems we will need them to get back into Italy if we ever leave.

So we contacted the state police in our regional capital and got an appointment for this morning at 9 am.  We then asked if we could pay the 32 euro each fee using online banking and show the online receipt with our documents.  We were told to turn up for the appointment and all would be explained, which didn’t help one bit. We were trying to avoid visiting the police, having to leave to go to a post office to pay the fee then returning to the police with our receipt.  So Mr FF made the decision, filled in the complicated payment form that requires so much detail, tax code, code for the specific fee, and went to the post office in the lower village, ours is only open every other morning. He was charged 3 euro for processing the payment which didn’t impress the Yorkshireman.

I was feeling a bit uneasy about todays visit, firstly because we had snow on Sunday.  We cleared our road and moved the car up the incline from our house, it was icy.  Secondly all of Lazio went into the orange (middle) lockdown zone on Saturday with stricter restrictions, like only going out for work health or study, otherwise not leaving your comune.   In small villages like ours, under 3000 inhabitants, it is possible to travel up to 30k but not to the regional capital.  We were going to the capital and it’s 45k away.  We emailed the police to ask if we should still turn up, they didn’t reply.

So we got up at 7.45 this morning, scraped all the ice off the car, well I did while Mr FF sat inside apparently controlling the heating. Our track down was fine, it was a bit icy in the village, freezing fog in the regional capital.  To get into the police building we had to complete a complicated covid declaration that challenged my Italian while my glasses steamed up from wearing a mask.   We had to wait outside in below zero temperatures as access to the immigration department was being limited, it was freezing cold once we got inside too.

We presented our papers, Mr FF had carefully checked the night before that we had everything, they asked for our passports, ok,  if we’d paid the fee, we showed the receipt.  They asked for our residency document, did we have a photocopy, no we didn’t, some tutting.  Did we have our marriage certificate, well that wasn’t on the list of documents required but fortunately we did as we’d received this, 6 weeks after despatch, from the UK on Friday and taken it to our comune on Saturday.  Did we have a photocopy of it, no we didn't but then we didn’t know we needed it anyway.  If we had taken photocopies they would still have wanted to see the originals, I think they were trying to save on printing costs.  Did we have two 16 euro stamps, they weren’t on the list either, we thought the 64 euros we had paid was the total cost.  The woman behind the desk then said ‘you have done nothing’ and tutted again.  I kept calm, it was the police station after all though I wasn’t sure if these people could arrest me, they were wearing white coats like doctors but with some gold trimming on their lapels.

Much computer taping. I thought things were looking up when they started stamping furiously and stapling pages together, always a good sign.    They asked for our photographs, didn’t mention how awful they were, two attached to a form and stamped, one attached to the receipt they gave us, presumably to identify us when we go back for the cards though the same photo would be on our cards anyway, goodness knows where the other photo went.

Next the finger prints.  Mr FF went first, there was a little machine with a square lens on the counter but it didn’t seem to work.  He tried several times as instructed, they gave him some cream to apply to his fingers, no joy, they told him to use the sanitiser gel, no, they brought alcohol and applied it to his hands, they inspected his fingers and cleaned the lens, eventually said it was ok, but that was just his index finger.  They took his middle finger and thumb, it was much the same performance of try and try again until it worked.   Mr FF said it was because he’s  always working he’s worn his finger prints off but in fact when I took a turn it was just as bad, cream, alcohol, try again and they only took my index fingers.

Then they called Mr FF into the back office behind the counter and glass screen.   I thought they were going to test his Italian, but they took his finger prints again, all of them, on a bigger machine that did work.  Meantime the woman told me we would need to go to the tobacconists down the road for the 16 euro stamps.  When Mr FF returned he said he’d get the stamps because I had to go into the back office for the new improved finger print operation which also included a palm print.  I was quite surprised to find that behind the counter the office was warm, it seems that heating is not considered necessary for the long suffering public, another cost saving exercise.

This whole procedure took 1.5 hours during which time a huge queue had built up.  Only 3 people were allowed into the office at any time, there must have been 20 waiting outside in freezing temperatures and based on our experience there weren’t enough hours in the day to process everyone and this was early morning.   At one stage several people started coming inside, they were sent out again.  One man came in saying he had an appointment at 10, it was 10.15, he was told to wait outside.  Fortunately no one objected when Mr FF came back in with the stamps, I was worried he’d have to fill in the covid form again but he didn’t, we handed them over, were told we were done and left.  We have to return to collect our cards when they are ready, we need to check online, I dread to think how long we might have to queue to do this.  I’ll take a flask.

It isn’t really within the covid restrictions for us to get coffee but I was desperate.  We stopped for takeaway cappuccini and croissant at a little bar in the shopping centre, where we could gel and have our temperatures take, fortunately I had cooled down from my rage.   We had the nicest coffee and lemon custard filled croissants I’ve had in a long time, I started to forgive.

Back at the car a man handed me a small envelope, he said it was a calendar.  When I opened it there were 3 plastic cards from Avis, a blood donation charity, with each month a list numbered 28, 30 or 31 with a saints name against each date, everyday is some saints day in Italy.  The man was going round putting them on all the car windscreens.  What the hell good are they, they don’t work as a calendar, they are hardly readable, what a useless polluting waste of money especially from a charity. 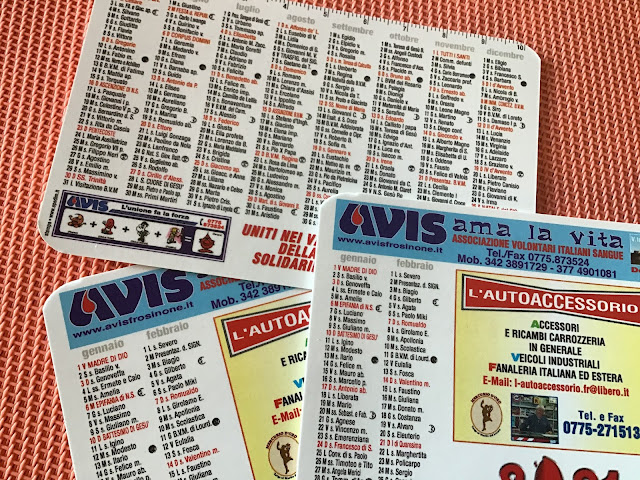 So today on San Liberta day I despair at the total disorganisation here.  We just spent half a day presenting to the police the same information we’d already given to our comune and the health board.  We shall have been to our comune 3 times and travelled 4 times to 2 other towns for our residency,  mixing with staff and members of the public.  We’ve been to various post offices, bars and tobacconist for stamps, we’ve paid the best part of 200 euro which is fair enough but not when it’s wasted so much of our and their time.  There has to be a better centralised system, it shouldn’t have to be a battle, surely a residency approval should trigger health entitlement without visits and duplicated information.  As for these bloomin stamps it’s crazy that the authorities that require them slapped on documents cannot provide them, or even take their own fees.

Ending on a brighter note, I may be making a charitable donation of the 50,000 staples Mr FF has back home, they should keep our part of Italy going for a day or so.