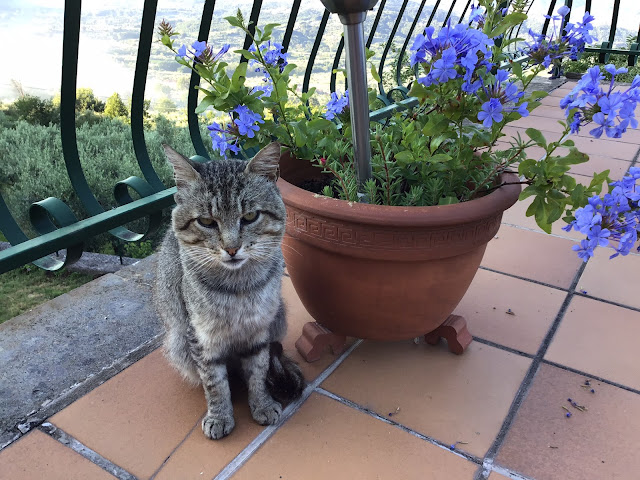 Enrico our stripey grey cat first appeared over three years ago,  a feral tom that we discouraged from hanging around, in fact we called him the nasty party.  He persevered, arriving most days to be chased away.

The following year he was still coming round, by which time we only had Grigio as her sister Crema had decided to go and live with Mario and was subsequently killed on the road.  Of course we gave in and started feeding Enrico outside.  In summer the terrace door is always open and gradually he had the courage to come inside, firstly just beyond the door, then onto the sofa until eventually he claimed one of the dining chairs as his own.

He was always a little afraid of us so when he was occupied with food I started gently stroking him from a distance with a small stick until he got used to the sensation.  After some attempts I was able to touch him and now he is one of the sloppiest cat we’ve had, the other was also a feral we took in when we lived in Scotland.

This year Enrico appeared within a couple of hours of us returning after 8 months absence.  He was thin but well and over the months has put on weight,  I can no longer feel his spine and his coat is glossy.  He has obviously lived a life, his ears are tatty and he has no bottom teeth. We never see him play or climb trees as Grigio does and it takes a lot of encouragement to get him to walk round the garden with us.  We have no idea how old he is, a friend in the village told us the average life expectancy of cats here is only 6 years.   He eats anything, including his worming tablets, generally stays close to the house, unlike a lot of male cats he doesn’t go off for days on end and best of all Grigio loves him as much as we do. 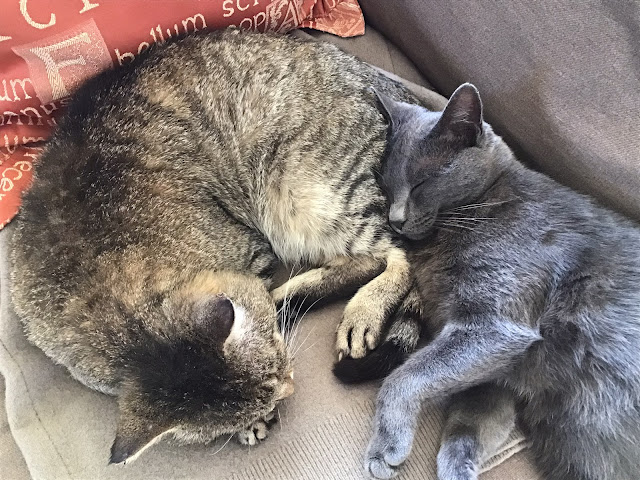 He climbs onto our knees at every opportunity, let’s us pick him up and loves a cuddle.  Grigio who has been ours since she was born is strangely less affectionate, maybe she takes us for granted,   Enrico is generally well behaved, doesn’t steal or beg despite probably spending most of his life hungry, and willingly goes out at night to sleep in the apartment or his little house at the door, better known as the Hotel Splendido.

We are so happy we gave him a home, at last he is loved and cared for, he repays us with devotion. 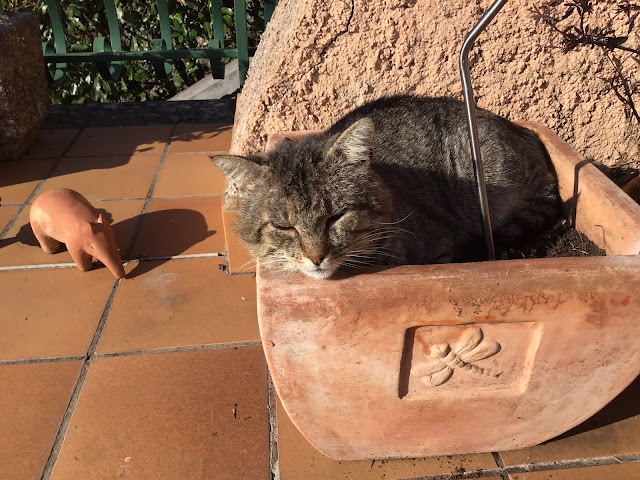