I've been busy knitting Christmas presents but have taken time out to use the lovely alpaca that was a recent gift from Toronto to make things for myself. 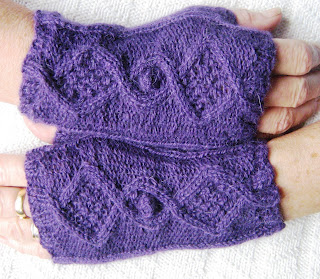 These are based on a pattern in Vogue that is also available on the website, adapted from gauntlets to mittens by using smaller needles and more stitches, I suppose really I just used the aran bit and otherwise did my own thing. 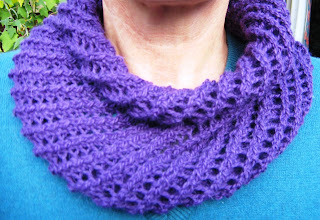 Then I made this cowl using a simple six row pattern that I found on Ravelry. Its knitted as a rectangle and the beginning and end knitted together to form a cylinder. I wore it when we were out yesterday and I'm delighted, light and cosy it sets off a plain jumper or a coat nicely.
I got the whole set out of 100 g of yarn, with barely anything left over so I'm really pleased.
I'm not so pleased however to tell you that my washing machine broke down on Friday, leaving me with sheets and kingsize duvet cover that came out much dirtier than when they went in. Something rubbery seems to have broken and smeared itself all over the laundry, I've tried to hand wash them but its a horrible job especially when things won't dry on the line and drip too much to be dried inside. The nice man from Elsrickle, who fixes our telly, is coming tomorrow but he's not hopeful that it will be worth repairing. I hope it is, I'm really not in the mood to go looking for a new machine. I'm finding Christmas shopping difficult enough having traipsed round Edinburgh on Thursday and come back completely empty handed. Even the prospect of 20% off in Marks and Spencer didn't make the massive queues seem worth while, and though John Lewis and Debenhams tried to counter with selected reductions I still wasn't inspired. Back to the knitting I suppose, cowl anyone?
Posted by Jennyff at 14:45