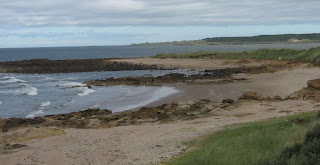 Saturday 25 August 2007 Mr Flip Flops was 59 and we celebrated the event with a day at the seaside. We drove out to Aberlady on the East Lothian coast, where by some strange chance there is a lovely crafting shop, Sew in Stitches. I was able to get a good look round, a lot of inspiration and a couple of purchases, the cream one is silk the purple cashmere, knitted by a lady in the village and only £3.50 each. 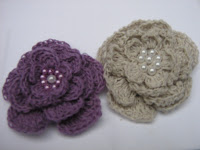 We walked along the coastal path from Aberlady to Gullane Point, it was a gloriously sunny day with many of the little bays completely deserted. We are big fans of the wild Northumberland beaches and sometimes forget that we have a great coastline not too far from home. We were having such a good time we decided to walk on to North Berwick and arrived just in time to catch the bus back to Aberlady. 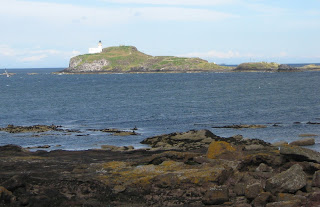 Two fish suppers, mushy peas (we are northerners) and a bottle of pop each, eaten sitting on a bench looking out to the bay. As I've said before we do like to make an effort.

Mr F F said it was a most relaxing day and next year he can do it all again with the benefit of a bus pass. He's going to have to come up with something good for my birthday in November, which apparently will take place in the USA.