Sent to try us

The challenges of living in Italy never cease, we have just about had enough. 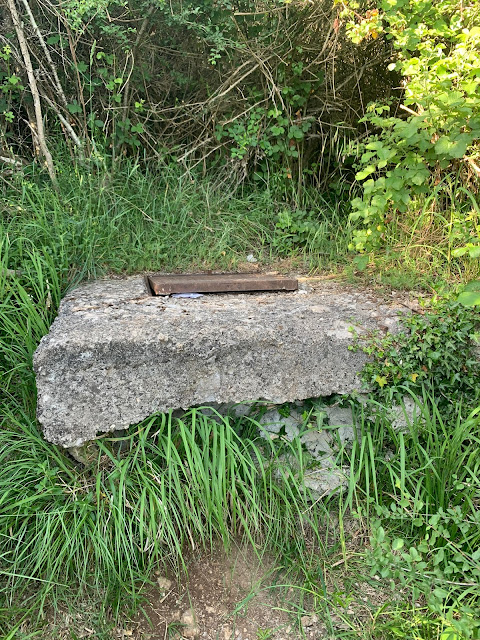 The worst thing is yet another water leak. MrFF has been regularly going up to the snake pit shown above that houses the 9 meters for our area.  He has to lift off the heavy lid and used to have to climb into the pit until the water board recently repositioned the meters so they are just readable from the outside, as you see here. 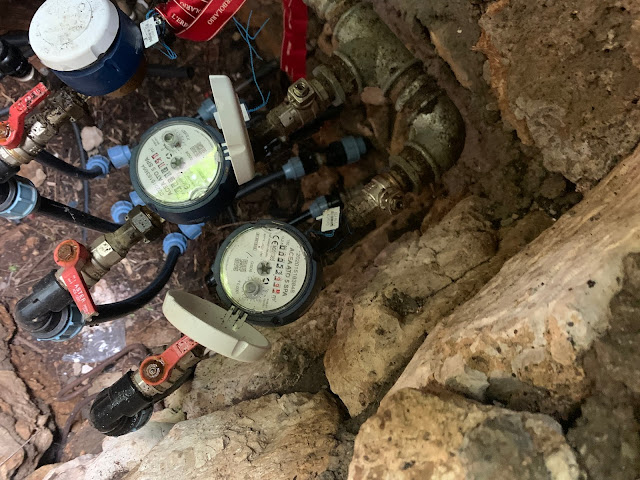 Since we returned our consumption had been low.   I recycle washing up and veggie cleaning water back onto the garden and we’ve only watered the veggie plants by hand as the irrigation is quite wasteful.  MrFF came down on Saturday night to tell me we have a leak, we’d used in the short time since he last checked as much as we’d normally use in half a year.  Some time ago he installed valves so he can isolate sections of our pipe run which confirmed the leak was again in the overgrown gully between our house and the road up to Giovanni’s.

MrFF was both cross and despondent about the leak because of the difficult hard work involved to find it, the cost of the water we’d lost and the sheer frustration of this never ending problem.  In fact one of his solutions was to switch off our supply, buy a lot of bottled water and ask at the hotel in the village if we could have a shower. Not up there with his best ideas.

Sunday we decided to have a day off from the terrace and the water leak and go to the morning market up the mountain.  This trip makes me nervous with all the big motorbikes overtaking so dangerously and cyclists descending at high speed, we’d hardly got to the next village never mind the mountain road before I was a nervous wreck.  The market was pleasant, MrFF got himself a linen shirt and a pair of jeans, we then walked round the town and stopped for a drink at a little bar we’ve used before near the market, the more upmarket bar we prefer was very busy. We each had an Aperol spritz, it wasn’t brilliant and the snacks you are always served with alcohol were pretty basic, but we enjoyed sitting out watching the world go by.  MrFF went inside to pay and came back in shock, we’d been charged 15 euro for two drinks that would cost half that in the elegant bar in our village, where they also provide a good selection of home made snacks.  We think we were overcharged because we are foreigners, other people there, ordinary local folk, definitely wouldn't be paying those sort of prices. This has never happened to us before though it has to non Italians we know, once a friend was charged 17 euro for a beer.  When he questioned the price he was told it was special.  It’s a horrible thing to do, we will never go back there although if we are at the market I will go inside and check the price list. 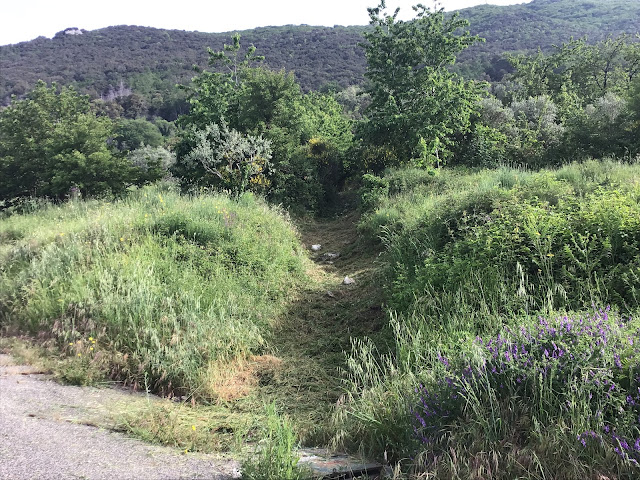 Back to the leak, Monday morning MrFF strimmed all the gully then we started the daunting task of finding the leak, him with a large fork scratching at the surface for damp earth me with my little gardening fork.  I was almost ready to give up when I found a small damp patch of earth.  We cleared the ground, dug down a little and left it to see if it was still damp later in the day. It was. Late afternoon MrFF dug down, exposed the leaking pipe and made a temporary repair.  However when he checked the meter it was still running albeit much slower, there was another leak which we located between the bottom of the gully and our house, most probably under the road.  We couldn’t randomly start digging up the tarmac so we spent more time scratching about among the surface cracks until again I found the spot, not so far from a repair last year. MrFF had it fixed by early evening though the road still needs reinstating. 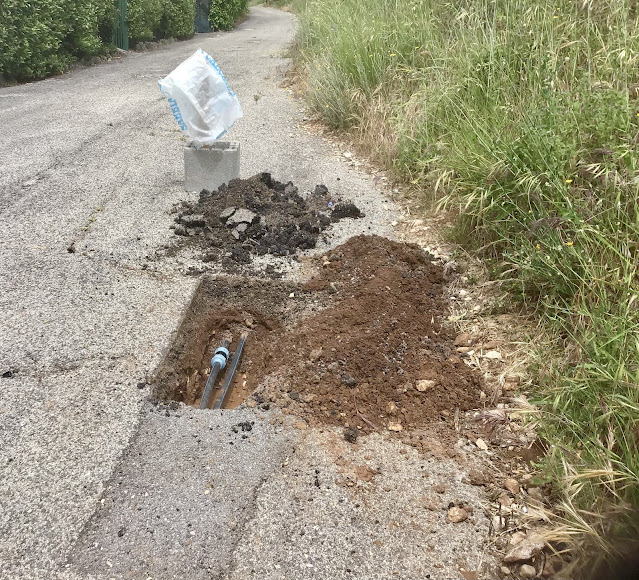 We are sick to death of this hopeless situation but complaining will get us nowhere, not even a response even if we send a message by the special secure email we pay for, we’ve already been totally ignored by two companies we’ve contacted this way, one of which is the tax office.  Permanent and summer residents all over rural Italy, the country with the third largest economy in the EU, put up with it, like the lady in our road who has received a bill for 20,000 euro for a big leak that has been running since last autumn when she went back to Rome.  So far her family have fixed two leaks, one under the top road, but she is still loosing water when the supply isn’t turned off.

Of course troubles come in threes.  This morning when I went into the orchard half our courgettes and half the broad beans had been eaten, some of the tomatoes had been trampled on.  There were big holes in the vegetable bed.  I brought out with me this year a motion activated wildlife camera.  I’ve set it up several nights and so far captured a crow, a chaffinch, a young fox and many photos of our cats.  Enrico seems to be taking the micky as he’s started parading in front of the camera and going right up to the lense.  Of course when I don’t set it up devastation happens, these animals are smart and sneaky, just like the water leaks.