I occasionally, well quite often, refer to some people in our town as the Ilkley entitled.  A certain element seem to think they are above the rest of us and can do what they like.  A recent example was a perfectly nice 100 year old arts and crafts house in a conservation area that sold for £1.75 million and was immediately demolished to be replaced by something more modern and probably less tasteful.  And don’t get me started about the number of large SUVs buzzing round the narrow streets our little town or parked outside the schools at home time.

Sunday I took a walk out and crossed the right of way bridge that spans our communal lake garden and links to the higher road.  I always take a look over the bridge because our so called gardener piles rubbish and clippings under the bridge, don’t ask me why it’s awful and actually quite depressing when I see what he has pruned at the wrong time of year.  Sunday I spotted several uprooted shrubs on the pile, including pieris definitely not from our communal garden, said idiot gardener killed the half a dozen we had a few years back by cutting them down to the ground,  I was furious at the time and still cross.

When I got back from my walk I asked MrFF to help me save the plants but he wasn’t up for that so I hoped they would still be there next morning, they were on private land and access would involve climbing the iron fence.  They were still there, 3 beautiful pieris in full bloom, an unidentified shrub, a rhododendron and some bulbs, I calculated more than £100 worth of plants just throw away.  I also discovered they had come from the garden of one of the houses further up our road evidenced by the gaps in the border and soil on the path.

The plants are all now planted in our lake garden, MrFF redeemed himself by digging the bigger holes.  A few plants were a little damaged after being dropped off the bridge but hopefully they will settle in,  it’s raining today which is good.

But who would do that, dig out decent expensive and beautiful plants, not try to find new homes for them and think it’s ok to lumber someone else with their cast offs. If I wasn’t so pleased to have them I’d consider it littering. 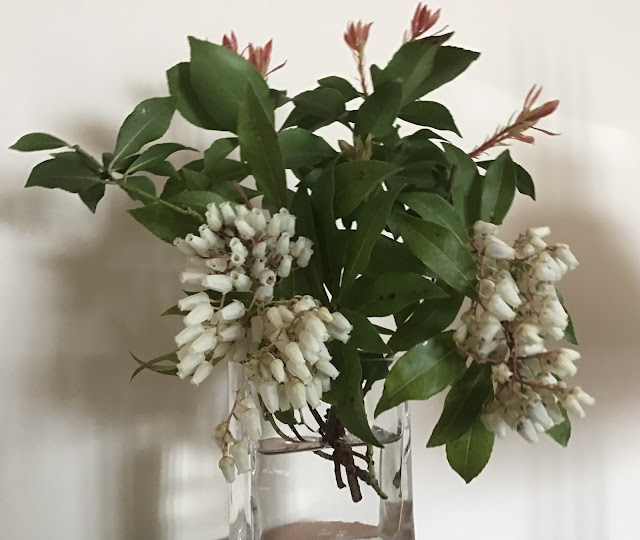 I cut off the broken branches and have a vase of pieris flowers on the kitchen table, saved me buying British daffs this week.   The entitled didn’t think about cutting off some flowers and probably drove the half mile to a florist for imported blooms to grace their home. More money than sense, they cannot be Yorkshire born and at a time when so many are worried about the rising cost of living and millions have been displaced by war it’s shocking to be so wasteful.