We are in Italy at our house.  We arrived late Thursday evening after a long and stressful 3 day journey.  We expected queues and confusion at the Port of Dover but the process was relatively easy, worse was to come.  Despite a lack of fuel before Canterbury, thanks to blockade of local depots by protestors, we had enough diesel to get to our first overnight if necessary and easily filled up in Calais.

On the second day we experienced long queues for the San Gottardo tunnel, fortunately we were forewarned and found toilets before we joined the 10k line for the entrance and sat for a couple of hours.    We didn’t reach our hotel until 9 pm, fortunately the restaurant was open, we had the place to ourselves but we were fed.

We were looking forward to a short last day, usually 6 hours to our house, we were wrong.  It took 3 hours to drive round Milan, in fact it was stop go all the way with crazy drivers who made me feel nervous.  Near Florence we were stopped for quite a while in a 3 lane tunnel, we kept edging forward and I assumed we were almost through until I saw a sign that said 5 k to the exit.  The police arrived with their sirens going, edging their way through the traffic, the lorry drivers started sounding their air horns and I considered having a panic attack.  There was even a hold up to get off the autostrada, it was after 9 pm so the shops were closed and we had no dinner.  We bought takeaway pizza at a bar where they kindly sold us a bottle of milk.

It was dark when we arrived at the house, we called the cats and they soon appeared.  We unpacked the essentials,  I tried to inspect the garden in the dark and MrFF discovered the hot water wasn’t working.  On Friday neither was the outside solar shower so we rinsed under a hosepipe in the garden, the man came on Saturday and fixed the boiler.

The weather has been lovely, it’s a joy to feel some heat, to have our own outside space and share time with two very happy cats, who really appreciate the crunchies and cat sticks we brought them from Waitrose.

Most of my balcony pots have survived, geraniums are in full flower.  I’ve had a good tidy, weeded the borders, we are starting to look good.  The plastic sheeting on the terrace had kept out the winter damp so the downstairs room is no worse than we left it, we had visions of the ceiling coming down.  We just need to recover from that journey, it was truly stressful and exhausting, but when I look at these 2 it was so worth it. 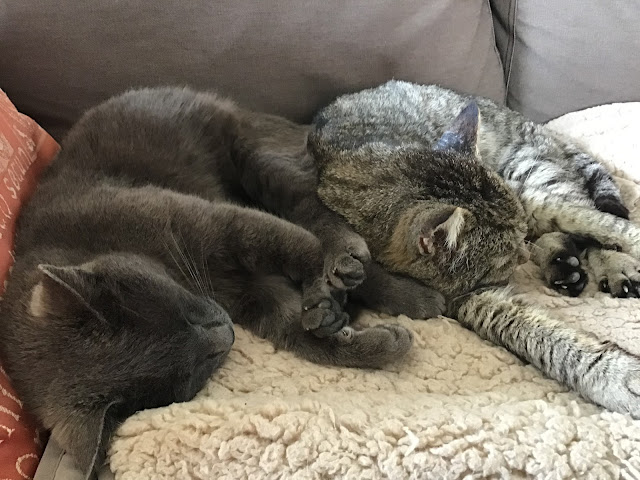