When we returned from Italy in August we submitted to our Ilkley doctors details of our covid vaccinations which they confirmed had been added to our records.  We planned to have our booster doses while back here for winter and tried to book them at the end of November.  However bookings could only be made a few days before the expiry of 6 months after the last jab so we waited until the end of last week when the first appointment we could get was in a months time.

Meantime the government reduced the time between 2nd and 3rd jab to 3 months and stressed the importance of the booster.  Presently 30 year olds are being called for their 3rd dose, we are both 73 and classed as elderly and vulnerable.  We were concerned as our 6 months would be 7 months by the time we were treated, at Christmas we hoped to see family but wouldn't feel safe doing so without up to date vaccination and the latest variant is causing alarm as cases rise.

I went on line to find an alternative venue but it was impossible to book anything, I clicked for booster but the only options were 1st and 2nd jabs.  MrFF tried too and got the same result, we then realised our records must not be up to date and we were considered unvaccinated.  We spoke to our doctors and they said the records were up to date, we spoke to the NHS who said they were not and that we would need to travel to Peterborough, a round trip of almost 300 miles to update the database.

So this morning we went to a walk in vaccination centre not so far away, no appointment required.    Fortunately it wasn't such a cold morning as we queued outside for about 1.5 hours.  When we arrived MrFF had taken the precaution of speaking to one of the stewards outside directing us who took our Italian certificates inside and after consultation confirmed we would be OK.  We were accepted and very grateful to be treated.

I know its complicated because we were vaccinated in Italy but we have the certificates with batch numbers dates etc it shouldn't be difficult to record these here.  Incidentally at the walk in centre MrFF got into conversation with a couple who were in exactly the same situation, they too had been told to drive to Peterborough, we could all go together.

And speaking of boosts, we had at the weekend a message from Mario that everything at our house is fine with this photograph attached.  Grigio dining in the hotel Splendido.  Mario said he didn't have a snap of Enrico who he hadn't seen that day but had seen 3 days before.  I am missing them, I hope they are keeping cosy as its very cold and a little snowy in Lazio. 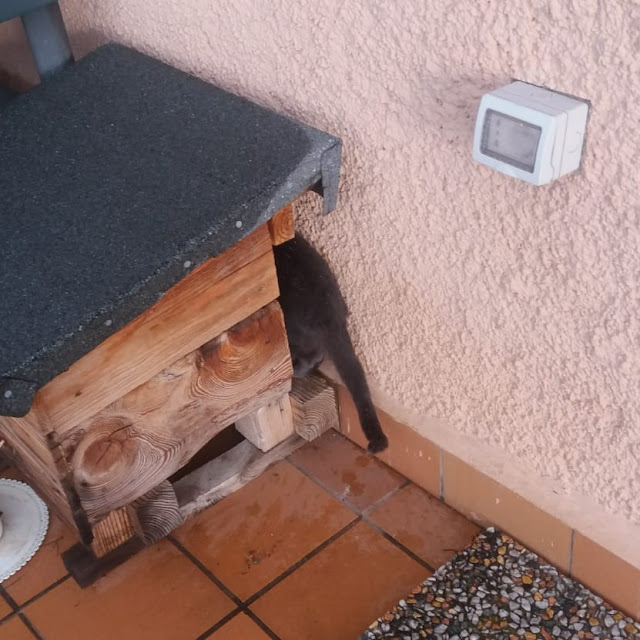