MrFF and I have enjoyed the Olympics much more than we expected to and are of course delighted with team GB’s array of medals.

But neither of us was impressed with British boxer Ben Whittaker who refused to wear his silver medal because he was disappointed with his performance.  It was much the same when many of the England football team at the Euros presentation immediately removed their runners up medals considering them a reminder of their failure to win the final.  I don’t generally watch football and I was surprised and confused to see this, a bit of research revealed that it often happens at football contests nowadays.

Well I think it’s bad sportsmanship and sets a really poor example, I hope England manager Gareth Southgate, who wore his medal, had a word with his lads afterwards and set them straight.  What happened to ‘it’s the taking part that counts’?

Whittaker said he hadn’t won silver he’d lost the gold.  I’m a cup half empty person myself but even I think he’s wrong and disrespectful to his fellow competitors.  Only three in every event win a medal, I imagine any one of those going home empty handed would be delighted to take his place.  Think of the 13 year old GB skate boarder Sky Brown winning bronze, she was rightly over the moon, would her British team mate Whittaker like to tell her she’d merely lost both silver and gold. 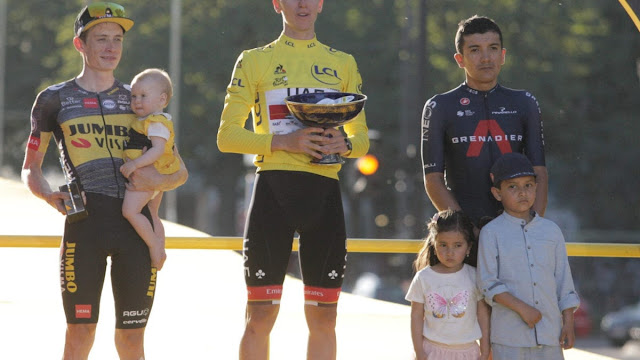 I love the final presentations on the cycling grand tours when the winners and runners up who have children take them onto the podium for the ceremony, small babies, toddlers, teenagers, because they are so proud whatever their placing.  Here are this years Tour de France first three, Pogacar the winner at only 22 hasn’t got round to having children but second and third were delighted to share the moment with theirs.

Speaking of children Whittaker said he didn’t want to seem like a spoilt brat, why behave like one then.  I don’t know if he has children, or intends to, is he going to pretend to his kids this didn’t happen, will he share with them his ethos that life is all or nothing, winning is everything.  We can’t all be top dog but we can give it our best, be proud of our achievements and gracious in defeat alternatively we can be sulky silver medalists when life doesn’t quite go the way we want.