We are on an emotional roller coaster as we try to arrange our return to Yorkshire.  We’ve had so many possibilities mostly concerned with covid, like self testing before we leave then getting a test in France to meet the Spanish French English language requirement. Finding information on French testing facilities is a nightmare with limited information only in French and a phone number to call.  The French I learnt almost 60 years ago isn’t going to help me at all.

Now we think we’ve found a local place just down in the valley, after having to beg for a response, that will give us results in English but because of the August holidays they have limited opening times.  However it seems that the test no longer needs to be within 72 hours before we cross the channel it just needs to be in the 3 days before we do so. Yes I know that’s ambiguous but the government website says if you are travelling on Friday get the test Tuesday Wednesday or Thursday. So that could work but we need to ensure the test is to the necesssary standard. Everyone it seems has a responsibility to do this, wouldn’t it be better if all the laboratories simply offered a test that was to the standard.  We swing between despair and hope, interspersed with anger at lack of support.

All the pots need to be moved off the terrace so that they are under the irrigation with a few days to check that’s effective.  I’ve run down the contents of the freezer and stocked up on cat food.  The car has two new tyres and has been through a safety check. 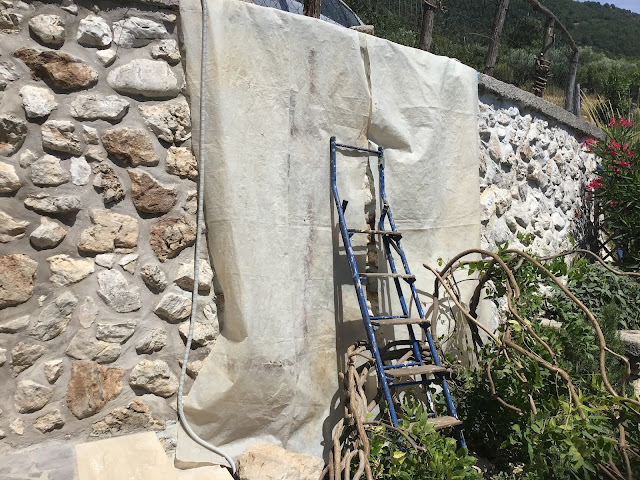 This morning MrFF was up early and finished the wall repair which will be unveiled tomorrow, he just needs to reinstate what’s left of the wisteria and later in the year replace the old fence. Meantime the temperature just keeps rising, 34 degrees yesterday.  Our friends are on holiday in Sicily which yesterday recorded the highest ever temperature in Europe, 48.8C  119.8F.  Maybe 3 days in the air conditioned car followed by a few weeks cool down in England will be worth the current hassle then we can start it all again to come back.