I didn't knit as much on holiday as I expected, I took an awful lot of yarn but I just didn't seem to get the needles out in the car that often and only managed two pairs of socks during the four weeks we were away. 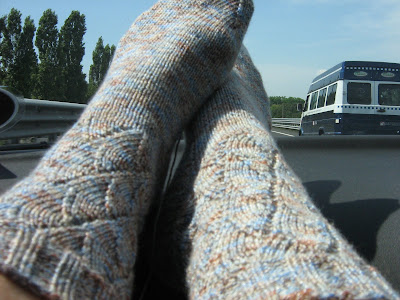 These are Tidal Wave, a pattern I've used quite a lot, in a Regia bamboo/wool mix. Having travelled to Italy and back they are now in Yorkshire, I sent them to my sister in law as part of her birthday parcel. 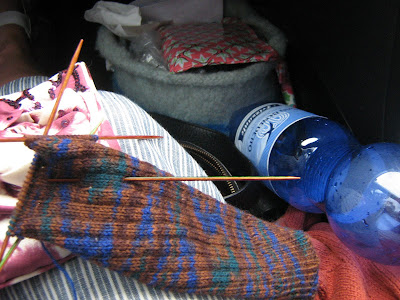 These are again Regia, 75% wool in a standard pattern with some ribbing which seemed to suit the colour. 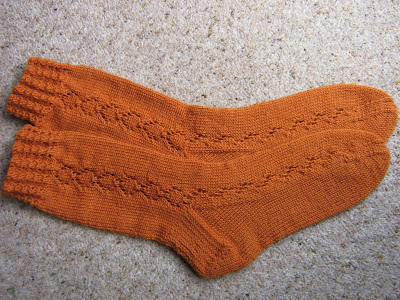 Since I got home I made these Fools Rush In. As the yarn is plain I wanted to add a little pattern but not too much, I enjoyed knitting them and am really pleased with the result.
I need to get stocked up with socks again as I'm having a stall at the September village market and another one in November. I've sold four more pairs since and because of the market in May but I'm not sure about the next event. I went down to the July market as a purchaser rather than a seller and it was very quiet. A lady had a stall selling baby clothes and only sold one pair of bootees. She asked me if I thought she was over pricing her items, far from it as she was selling pretty little cardies for £5. I told her I charge £15 for my socks and that she shouldn't under sell her work but I could see she was very disheartened. Such a pity, maybe baby clothes is a limited market or maybe I was very lucky to get such a good response to my first effort. I just hope people start Christmas shopping early and I get some more sales otherwise my whole family will be receiving socks, but then they do anyway.
Posted by Jennyff at 18:56