I mentioned that we'd had yet another encounter with our bloomin Italian bank
Through our own ignorance we hadn't realised or been made aware when we registered the four year lease (that lasted 3 years) for our corporate let that we actually had to register the contract and pay the fee every year. In fact we discovered recently that we could have registered the whole four years at the outset and received a discount but we believed registration was, like for a birth or a marriage, something you did once. Eventually we received a demand for the other 3 years registration fee, plus penalty charges plus administration costs. Our Scottish/Italian solicitor spoke to the authorities for us and it was agreed that we could pay the demands when we went out to Italy and an appointment was made for us to visit the tax office on the Tuesday morning at 10.30 to give them copies of the receipts and sign everything off. Even though the contract finished early, it lasted 3 years and one month, we actually had to pay 4 years registration (plus penalty etc) and we also had to pay an additional fee to cancel the contract early.
As you can imagine we weren't in the best of humours when we went to the bank, the branch situated just by the tax office, to make the payment but we were in good time, unusual for us as Mr FF mentioned. Spoke too soon, things started to go pear shaped straight away. I got stuck in security system that lets you through the first door then holds you in a perspex box for a while before releasing the second door to let you into the bank. After I waved frantically for a while the manager, whose sole duty for that day seemed to be to release trapped customers, let me in as he did for several others. 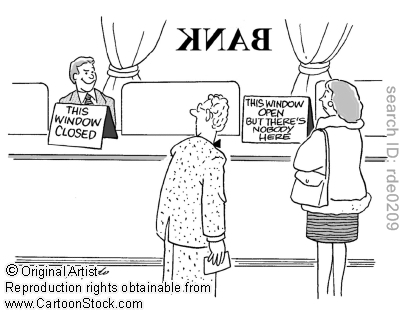 There was a big queue and only one position open, actually there was only one position full stop with a very busy teller. There was also a woman banker wandering around who the whole time we were in there did nothing except strut about her too high heels and her too tight jeans looking over the teller's shoulder and down her nose at us.
We got the payment forms, there's never a remittance advice with a demand, its down to you to go to the bank, find and complete the right one with your tax code and various other details. When it was our turn we presented the four documents for payment, plenty of stamping of the various copies and tapping on the computer. Mr FF then offered his debit card, it wasn't acceptable, he got out the cheque book, that wasn't acceptable either, only cash was the reply. Mr FF asked how he could get the cash, the total bill came to almost 3,000 euros and the teller pointed us to the cash machine next to him. Yes it does seem odd hat you are in a bank, you have to use a machine to get money to give back to the bank. Mr FF asked how much cash we could get out in one day and the answer was I believe 750 euro. Mr FF then asked how we could pay the bill to be told it was impossible. So began the frustration, we explained that we had to be at the tax office with receipts in half an hour, that this was a branch of our own bank, that we had enough funds in our account, that we wanted to pay a government bill, how could any of it be a scam. Mr FF asked the teller to contact our own branch in Rome and we sat down to wait. Our bank said they couldn't release funds as they didn't have a copy of our signatures on computer (and obviously the various documents on file we've signed there over the years there didn't count at all). Mr FF produced our passports pointing to our signatures but these were simply waved away by Mrs tight jeans. We started to plead, we phoned our solicitor in Edinburgh and she spoke to the bank to try to get some action, we were sent to the back of the queue again. Mr FF got extremely agitated and started pacing, I think the bankers considered that a result. I was tempted to lay across the seats in the style of people in airports whose flights are delayed. After an hour or so Mr FF went to speak to the manager/door monitor and eventually he agreed to phone the bank in Rome again who said they would send a fax to authorise our payment, this latter action itself took another hour, we could have driven there and back quicker. We waited and waited, Mr FF pacing me glaring until finally we were called back to the counter and the transaction took place, with no sign at all of the awaited fax.
We were in the bank 3 hours, we were 2.5 hours late getting to the tax office and ready to face some old dragon who would refuse to see us though our solicitor had promised to phone and explain the delay. Ms Lancia turned out to be a charming and beautiful young girl wearing colourful cropped trousers who greeted us like long lost friends and wasn't at all cross that we were late. We showed her the documents, she agreed that it was very unfair that we had to pay a full years fee when the lease only lasted for one month and that we also had to pay because the lease was cancelled, she processed all the paperwork and told us we were finished.

I won't go into detail about our next visit to the bank for a new cheque book, which must be collected in person and cannot be posted. We asked for 30 cheques but after speaking with the manager we were only allowed 10 cheques because we already have some unused ones. We did manage to put our signatures onto the system for future use but never fathomed out why our statements and other information are sent to our Scottish address but our credit card is delivered to Italy. We'd really like to move our bank account but have a sneaking suspicion that it would be far too complicated, probably involving blood and DNA samples, a full interrogation and at least one overnight stay.
Posted by Jennyff at 09:41