Home from the heat and dust

We got back to Scotland at 5 am on Wednesday after the long drive from Dover but I've been feeling the road travellers equivalent of jet lag so forgive me that I've only just got round to posting.
Well that was some trip, I won't grace the 4 weeks we've been away by saying holiday, it certainly wasn't that. A half day trip to the designer outlet and to eat lunch beside the lake on our wedding anniversary, one coffee out, taken standing at the Autogrill counter, one ice cream, a couple of nights out with our neighbours and a visit to our friend in Rome, no I don't think that qualifies as 4 weeks holiday. So what did we do the rest of the time, you may well ask. The day after we arrived at the house, having been on the road for 3 days, the dust sheets came out and they stayed in position until the day before we left. 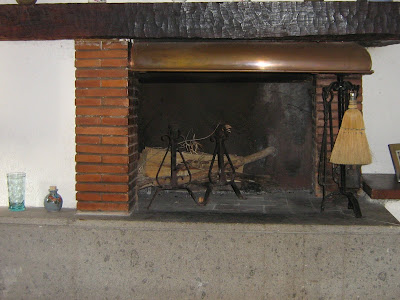 Mr FF started knocking out the existing fireplace straight away, cue the beginning of the dust, ready for the arrival of the wood burning stove due sometime the same day. 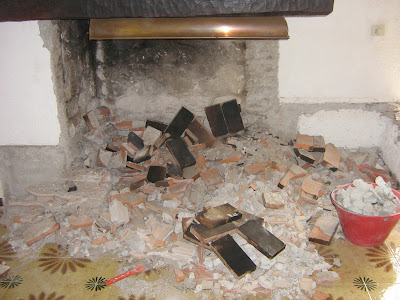 We ordered and paid for the stove in the UK several weeks before we left with strict instructions that it was to be at the house the day after we arrived, Monday. Of course it didn't come and then we received a phone call from the Italian shippers in Milan to say that it would come on Thursday and that we would have to unload it from the lorry ourselves or pay another £50 for a mechanical lift. We explained that the cast iron stove weighs about 200 kilos, that we had paid the extra, that we were both in our 60s, that lifting it would be a health and safety issue etc. After several more stressful conversations our UK providers paid again for off load. The Italian shippers then said that if we wanted the stove before we left Italy we would have to pay another £70 for express delivery. Things got very heated then and eventually the stove arrived about 10 days late which made preparing the hearth and flue for something you hadn't seen with minimal information quite difficult. 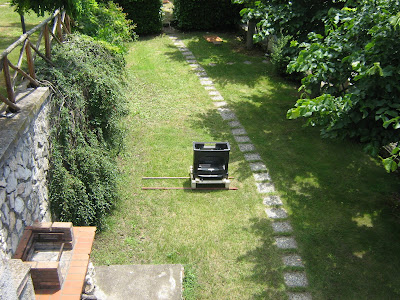 The drivers dropped the stove at the end of the garden for us, the jack wouldn't travel across the lawn so Mr FF stripped off the doors and as many of the internal parts as possible to reduce the weight and devised a system of rollers, think slaves building the pyramids, to get the stove through the garden to the bottom of the steps where it sat for several days while we stressed about getting it to the top. 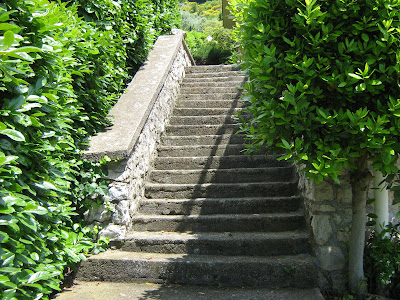 We ordered a lovely piece of marble for the hearth and when this was oh so carefully delivered by the guys who had made it, we asked them ever so nicely if they would help us. Help us, they grabbed the stove and between them had it up the steps in a flash, a quick beer each, hand shakes and many thanks for us and they were gone. From there Mr FF and I eventually shimmied the stove into the house and finally with planks onto the hearth.
Mr FF spent a lot of his holiday up the chimney 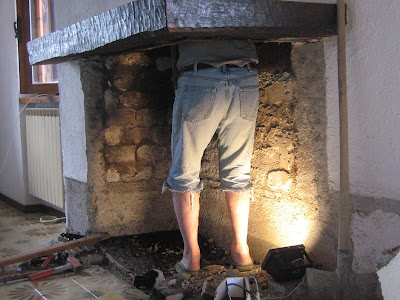 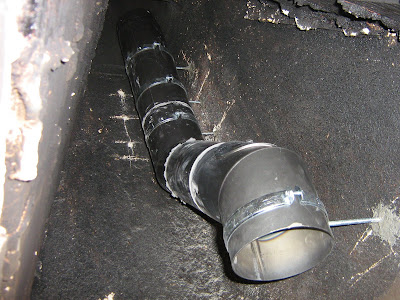 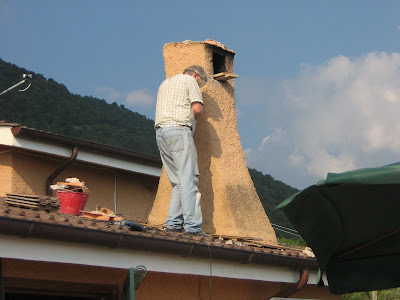 and fitted a lovely cowl, almost as good as a disco ball on a sunny day. 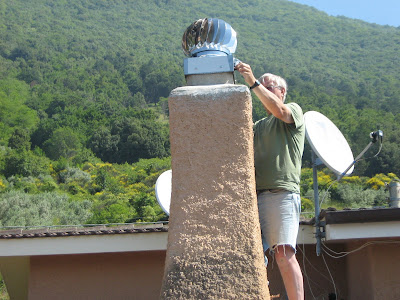 We worked so hard to get this stove installed but everything was against us, the hassle with the delivery, sourcing fittings and working with different systems took so much time, in fact the day before we left we didn't stop and sit down for our meal until almost 11 pm. 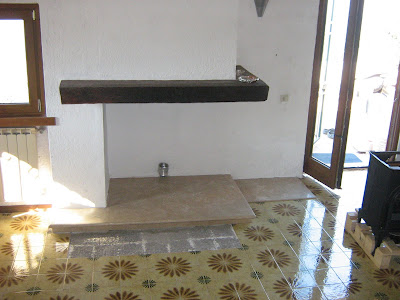 Here we are with less than 18 hours left, during which time we had to finish the work, eat, sleep, pack and clean the house ready for paying guests who were coming in that evening. We eventually got the stove into position but not connected, no great problem as it won't be needed for a while and looked presentable enough but disappointing none the less. 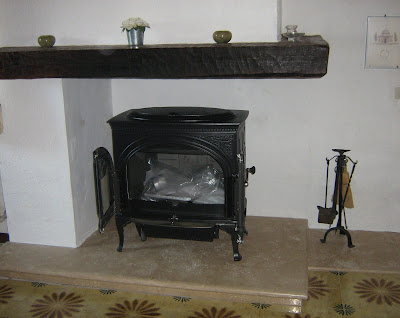 So much hard work and while we were working on the fireplace the local joiner fitted new double glazed windows and external doors adding to the general chaos and mess. The house looked brilliant when we left, well anything was going to be an improvement on 3 weeks of dust and rubble. Some resentment on my part that we didn't benefit from all the work but in many ways I was ready to leave as it hadn't been much fun. That's the work related rant over, I still have to rant about our latest encounter with the bank and tell you about the good times we had, I just wanted to get all that off my nicely tanned chest.
Posted by Jennyff at 09:20