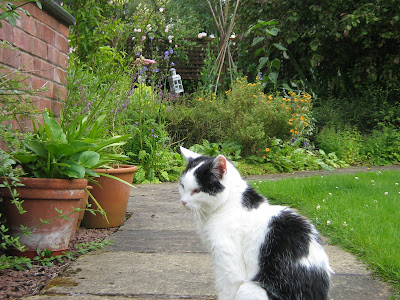 I took Cleo to the vets last week, she'd not been eating much, drinking lots of water and was quite subdued. Before we set off I assured her that she would be coming home and that she should put on a good healthy show to confirm that she still has plenty of life left in her. She was a complete star, walking round the surgery while Trevor checked her leg injury and purring constantly. Trevor was amazed by her recovery, he said the x-rays of her leg had been horrific and he couldn't believe how happy and alert she was. In fact she was only on the pain killers they gave us for a day or so, they completely zonked her out and she didn't seem to be suffering when we didn't administer them so we stopped. Within a few days her limp improved and now she walking is perfectly normal.
He gave her a thorough examination and reported that her thyroid was overactive, putting pressure on her kidneys though oddly not her heart. He gave her a couple of injections and asked me to take her back in a few days once she had made some progress. Actually Cleo was slow to recover but in the middle of the week her appetite improved and we both took her down to the vets again yesterday.
We all agreed not to take any more action on her thyroid, blood tests and the like, because any medication would suppress her appetite and basically her kidneys aren't going to get much better. She can have an injection every few weeks to help and David, who she saw this time, suggested we try her on a special diet for cats with renal problems. He kindly gave us a few sachets of the dried food to try with the caution that generally cats don't find it very palatable so whilst it really helps their metabolism, its difficult to get them to eat it. Cleo is on her second packet already, she can't get enough of it. I'll probably go back to the vets this week, buy a full size bag and she won't touch it again. David also checked out Cleo's leg injury and said that sometimes cats like to make fools of us all. Such a defiant, stubborn girl, I wonder where she gets it from.
Posted by Jennyff at 17:34