The not so smart meter 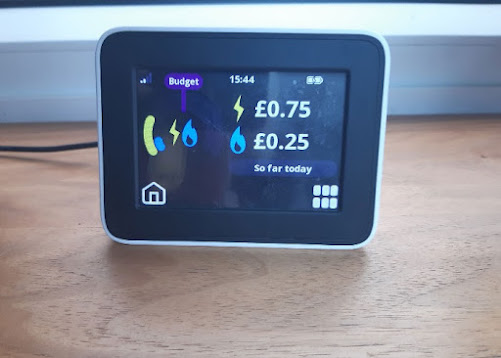 MrFF has always been quite keen for us to have smart meters monitoring our power supply, those that give you detailed information on your fuel consumption and can be read remotely both by the supplier, cancelling the need for physical meter readings, and by the homeowner from a small rechargeable device like this.  He tried to get these meters some time ago but the technician who came to carry out the installation said because our two meters are in separate rooms in the basement of the building they cannot connect to each other and wouldn't work. We thought this was strange as a few residents already have them in the same locations.

When our energy provider went down the pan last year we were allocated a new one, Octopus, who said they would be able to fit smart meters for gas and electricity.  The man duly arrived, he said the first thing he had to do was check that our appliances were working and he would check again once the meters were fitted.  This seemed to involve him annoyingly turning on all the gas rings and letting them burn for quite some time while he checked the boiler.  He asked to see the gas fire working but this wasn't possible because we didn't have a battery for the ignition.  These batteries cost around £75, they last less than a year, we don't use the fire because it give no heat and the flame effect is miserable.  I think there was a clue when the fire basket was full of tiny fairy lights which the man asked us to remove.

After he had fitted the meters and whilst in the depths of the basement he handed over some papers for MrFF to sign, which he did.  We always do that, just sign whatever we are asked, in our 70s we never learn.  It was only later that MrFF realised that he had been issued with a danger do not use notice for our gas fire which had been condemned because it couldn't be checked.  In itself this wasn't such a big issue, we don't use the fire, but because we live in a building with 26 other apartments this could have an effect on the communal insurance, we are obliged to have regular safety checks and the notice would go on the register.

We were cross, if we had known beforehand we would have made sure the fire was operational, in fact officially there is no industry requirement for the meter installer to check any appliances and most companies do not do this.  Anyway after much discussion with Octopus, it took 4 emails before they accepted that when we said flame effect gas fire that's what we meant. We had several concerned emails from them about our meter not working and asking if were we vulnerable without power. There was a lot of argument as you can imagine, eventually Octopus agreed to pay half towards us getting a gas safe technician to certify the fire, Octopus refused to return to do that though they were the ones who had condemned it.  We have paid almost £150 for a new battery and a test to remove the do not use notice on an appliance we do not use.

As if that wasn't enough the remote reader in our apartment doesn't work, too far from the meter.  However that doesn't stop MrFF going down to the basement for regular readings which he somehow puts onto his phone.   Every day he tells me how much power we have used and points out the alarming spike on the graph when I cook dinner.  I am as frugal as the rest of you, our energy use is very economical, we don't have the heating on during the day and because we have a lot of loft insulation its not on much at night.  I am hoping we can continue to have a hot meal and while I know rising energy costs are an issue for many people I really don't care how many killowats it takes for me to use the oven.

Smart meters, I don't think so.  I've checked, we would have to pay to have them removed and the old ones style meters reinstalled.

Post post note - MrFF has now admitted that our consumption continues to be very low and that the cooking spike that looks like a lot of money is about £1 worth of power, he’s probably using an equal amount himself checking the figures.

Post post post note - our Italian water supply has been reconnected, with no explanation or apology of course.  We are not sure if the other neighbours are back on stream.