Mr FF went down to the Comune at the beginning of last week, Mrs Unhelpful wasn’t there but one of her staff issued a receipt for our residency application made 6 weeks ago, enough to register for healthcare.

He hadn’t been home two hours before the police arrived, they are required to come and check us out, make sure we are indeed resident. The officers were two beautiful young girls, they were so nice, admired the garden, the new terrace and our views. One of them was a knitter who spotted the sock I’d been working on and left on the outside table.  They said everything was fine and that we should stay here and never return to England.  We were so happy.

This just left the healthcare to register followed by a visit to the wool shop.  Wrong.  We went to the large clinic half an hours drive away where the administration office is located, presented our documents and were told no they weren’t in order.  Cue chaos.  I think 8 different people appeared, all handling our documents and shaking their heads, phone calls were made.  I truly think none of them knew what they were doing and because they didn’t recognise our UK S1 form said we needed to buy insurance at a total cost of more than 1600 euro.  I told them with this form the U.K. would reimburse any health costs we incurred in Italy, they said the form wasn’t in Italian which it wouldn’t be as it covers all of Europe.  Mr FF pulled up a translation on his phone, they weren’t interested.  He also showed them the legislation that confirmed its validity, no one wanted to see it.  A particularly objectionable man said the S1 had expired, he was reading the issue date but wouldn’t be told,  and that we had to verify why we were in Italy, by which time I was asking myself the same question.  I explained the police had checked us and everything was ok. One woman said we didn’t need healthcare as we were only there for the Christmas holidays, you couldn’t make it up but they obviously did.

There was shouting and banging down of papers, Mr FF got cross and said he wasn’t leaving without healthcare, I walked away thinking I’d have to be seriously ill before I’d be a patient in any Italian hospital.

Eventually we left the department of fools and went to find the chief to complain.  She wasn’t in but her secretary copied all our papers and said she would pass them on.  We came home, the wool shop by now closed for a 4 hour break, and confirmed everything in an email.

When I’m not feeling absolutely furious I feel sad that such a beautiful country with so much potential allows itself to be excessively bureaucratic, that it spends millions paying public servants who appear to hate the public and are ignorant of the laws they administer.

Saturday morning we went again to the comune to ask for our residency registration certificate.  We were there 2 hours, we were told we had to go to the embassy in Rome for an original of our marriage certificate.  I told Mrs Unhelpful we would not do that and asked if we actually needed to be married to be residents, she just smiled.  She said we had to go to our regional capital for a card with our tax codes on it, we’d  already given her copies of our code documents, again we asked why.  Eventually she agreed to issue a document, not the residency certificate we wanted but oddly one that shows we are covered under the terms of the EU UK withdrawal agreement and is the next stage after residency.  We signed some forms, she entered data, we paid 64 Euro she then said we’d have to go back on Monday as her computer had developed a fault and offered to sell us ID cards at 22.50 euros each.  As we left she said she’d done a full weeks work, that explains a lot if  2 hours work equates to one week in Italy. 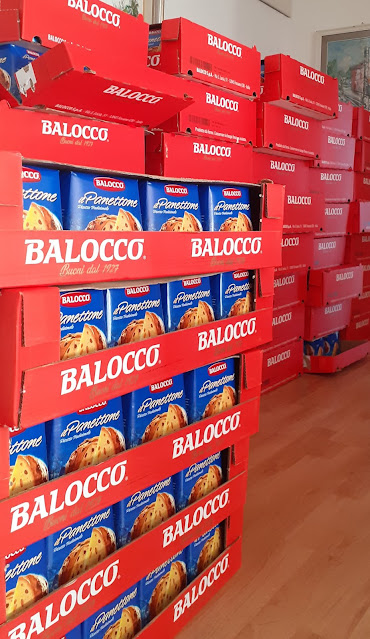 It was comical chaos in the building, we never got beyond the reception with people coming and going and stood there for 2 hours while 3 members of the Red Cross shipped 100s of panettones from the building into an ambulance.  Apparently every Christmas the comune gives a Christmas gift of panettone, prosseco, chocolates etc to everyone over 65, the mayor was there ready to distribute the treats in the village square. The photo above was the actual stock in the comune building, I downloaded it from the comune website, I wasn’t kidding there were hundreds.

We have to try again at the health service with our new forms if we get them but the office doesn’t open until Wednesday next week.  On Thursday the whole of Italy goes into full lockdown until 6 January apart from a few days here and there,  basically we have to stay at home so Christmas is sadly cancelled for families.  For me it will be a relief not to continue our battle for a while.

This morning we were surprised by an Italian friend who was in the village to see his parents while he still can and called by with gifts.  He knew we would have no presents so brought some treats including home made liqueurs and a little wood cross he’d turned himself.  Gianluigi thank you so very much, that is very special and extremely kind, much better than a panetonne  from the mayor. 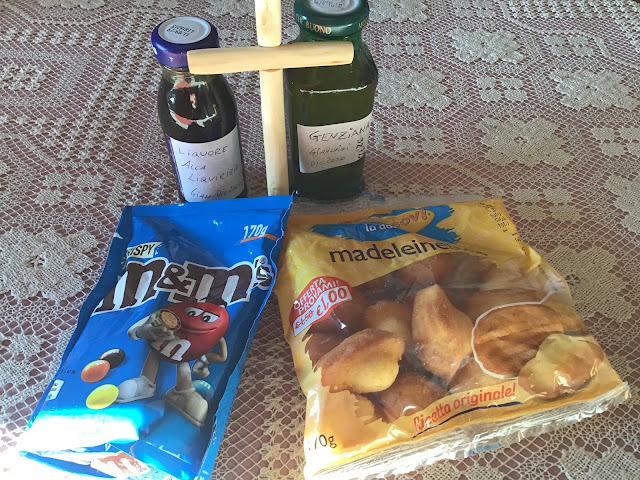 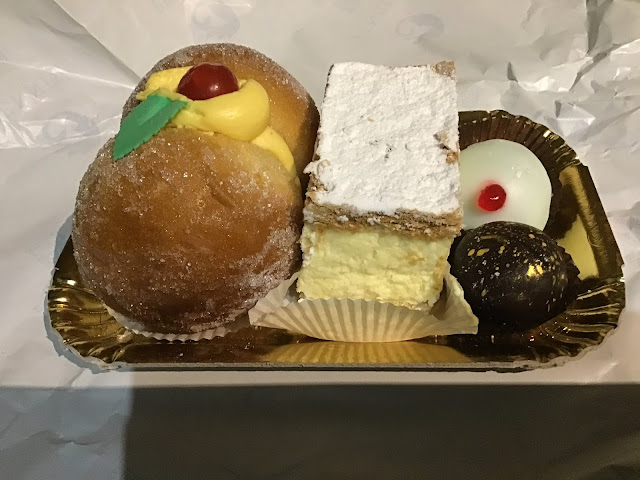