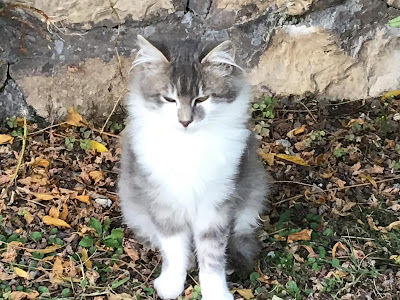 They are waiting here every morning at the terrace door and sleeping in the feeder house. Enrico is fine with them, he comes from a similar background, but Grigio isn't so pleased and likes to box the kitties ears now and again.  There are two grey and one grey and white, the littlest isn’t in great condition, a bit too thin, but the other two are well and now allowing me to touch them.
We told Mario there are at least five cats here now hoping he would understand the feeder will need regular top ups when we leave.  He just said five was too many, he needs to tell that to the people of the village who allow their cats to breed so profusely.  It’s hard enough leaving Grigio and Enrico to exist over winter, now it’s a much bigger problem.  None of the five are greedy with food and none are aggressive but there is always the worry that other strays will get wise to the feeder and come regularly, it could become very competitive.  We never know what’s happening to the cats when we are in the UK, when we came back this year the opening to the feeder house wasn’t even up against the wall so despite Mr FF’s careful design any large animal could get to the food and probably did.
I am at the miserable stage now of knowing we will be leaving soon, ready to be back in the UK, not wanting to leave the cats and knowing there will be several months of worry and concern about them.
Posted by Jennyff at 09:10