This is not natural

I need to alert you to a buying and rather strange knitting opportunity.
At the end of last week I purchased some Regia Creativ at an excellent price, £1.69 for 100 grams of 75% wool plus a reasonable p&p charge from Kemps Wool Shop in Sunderland. 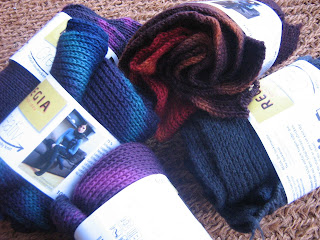 I knew before I ordered that the yarn came ready knitted which I found a bit baffling. 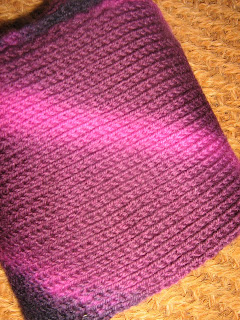 The ball band suggests that you either go ahead a wear the scarf, which personally I wouldn't as its a bit on the mean side and I have many much nicer ones, or unpick it and knit socks.  I had a bit of difficulty working out exactly how to unravel the yarn, the instructions said cut where indicated but there was no indication so I phoned the shop.  A really helpful lady explained that I needed to cut away the contrasting yarn at one end and start knitting, she also said that it would be a good idea to knit the second sock from the other end to make a pair.  Both ends of this scarf are purple and pink the centre pink and dark pink.  I'm planning a sock with some pattern to it, I think the shading can take that but not quite settled on which one yet 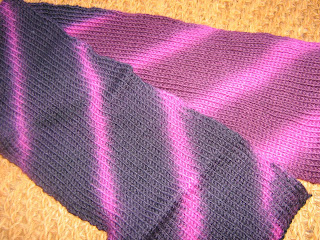 When I finish the first sock I intend to wind the second half of the scarf into a ball and knit from that as I find it difficult to unravel knitting from the wrong end.  It is very odd knitting with crinkly yarn from an existing item and somehow goes against logic. 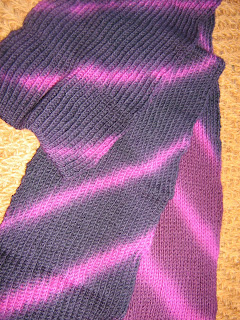 And what about the aran I hear you ask, I'm about 2/3rd of the way up the back but reluctant to continue if I can't get more yarn.   I've emailed and phoned the producer and still had no response, how strange to have an answering machine for the sales department, for all they know I could want to buy several sheep's worth.
Posted by Jennyff at 12:47