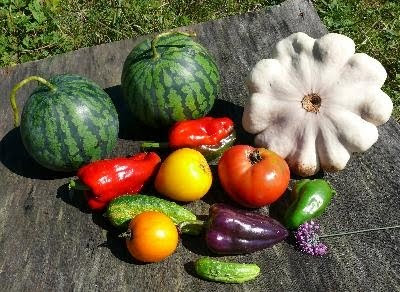 No I haven't been internet shopping for a new husband but I wanted to tell you how funny Mr FF's idea of provision shopping is. When I was working I used to buy our food either during my lunch hour or after work so that we didn't have to spend precious weekends at the shops. In those days Mr FF's only visits to the shops were to buy wine though I did finally train him to pick up some tins of cat food when he was at the supermarket rather than come home with just a few bottles of plonk. Now that I'm retired I normally do a big shop every seven to ten days and Mr FF, who works from home, supplements this by collecting fresh items on his way back from any meetings. Even if I haven't asked him to buy anything he still tends to call in at his favourite shops if he's passing, these being Lidl, Aldi and Costco where he acts totally on his own initiative. He believes that anything from these places is a complete bargain though I did make him take back a really horrible jogging suit he once bought for Amelia. The spontaneous food purchases can be quite odd, I do the cooking so I often have to use my imagination to incorporate them into our meals. He surprised me once with 6 tubes of anchovy paste, obviously on special offer, that I was able to use in pasta sauce and the like but I did end up giving some away, rather diluting his bargain. Recently a really cheap fruit pie deeply sprinkled with sugar didn't go down too well and he can over purchase on bacon at times.
On Friday his purchases were an aubergine, some parsnips, potatoes and dried pasta, all perfectly usable though not at the same time. Nothing ever gets wasted and I don't want to discourage him, in fact I enjoy unpacking his reusable jute bag but one day he will defeat my cooking repertoire I'm sure, probably soon after he reads this post.
Posted by Jennyff at 10:58