Nature, red in tooth and claw

I garden organically and try to work with nature, but it's not always pretty.
We've had a cock pheasant in the garden since Christmas, strutting around and feeding under the bird table he's a very fat and handsome guy. Recently he was joined by a hen and they made all the appropriate noises as spring approached. I was a bit worried that there would be a nest in the garden and sure enough at the weekend I found the female sitting on the ground up against the back garden fence behind the compost bins in quite an exposed position. 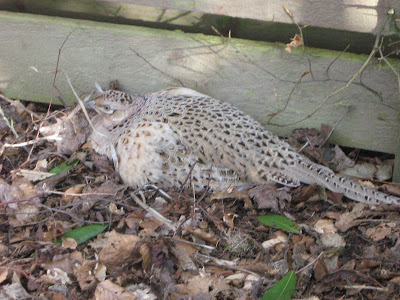 When she came down to feed I crept up the garden and saw 13 eggs in the nest, though she wasn't too pleased about me being around and followed me back down the garden almost as if she was chasing me away. On Saturday morning I walked up the garden, she wasn't on the nest and when I looked there were only 2 cold eggs left, Sunday it was empty. I had been worried about her sitting on the nest for the next 28 days or so and concerned that when the eggs hatched the chicks would be in a lot of danger. Additionally I wasn't looking forward to having so many large birds scratching around in my garden but what could I do. I really didn't want the nest to be devastated like this, but looking on the net it seems that less than 50% of pheasant eggs hatch, crows and foxes are the most likely predators. 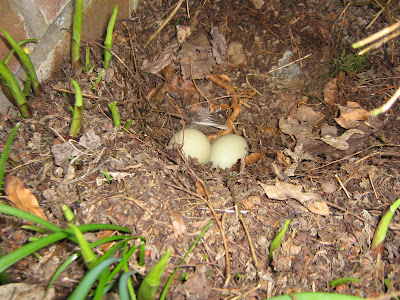 Then on Sunday when I was cutting back a shrub beside the front door I exposed another abandoned pheasant's nest again with 2 eggs left, presumably same father different mother. It was much better hidden but very close to our front steps and it makes me wonder what dreadful deeds happened on our doorstep.
Incidentally, the line that I used for my title comes from a very long poem by Alfred Lord Tennyson called In Memoriam AHH, it also contains these lines that might bring some comfort to the birds
'Tis better to have loved and lost
Than never to have loved at all'.
Posted by Jennyff at 09:22