The ring of happiness

This is a story I've been wanting to share with you for months and months but I needed it to be complete before I did so, and that happened today when my relatives came up from Yorkshire to stay in our house while we are in Italy for a week.
When I was 13 years old my mum gave me the gold signet ring that her father had given her when she became a teenager. I loved the ring, it was the first piece of real jewellery I had and a connection with the grandfather who died about a year after I was born. I wasn't allowed to wear the ring for school but I did put it on as often as I could and wore it constantly during school holidays. After a couple of years I lost the ring. I was in the harvest field with my dad and my youngest brother who was a toddler, I bent to pick him up and the ring must have caught on his clothing because it fell off my finger into the stubble. I searched for a long time but it was an impossible task and finally I gave up. I made a note of the location by counting the number of trees in the arcade of chestnuts that ran alongside the field and the number of corn stokes in the opposite direction. I went back again on other days to look and my cousin, who sadly died three years ago, helped in the search. My dad looked when the field was ploughed but the ring never turned up. Over the years I often felt sad to have lost this ring, I did think about buying another but it wouldn't have been the same.
Early this year I had a phone call from my sister in law, who I'd told the story at some stage, to say that a man had been metal detecting in the field and found a gold signet ring with the initials EL, my mum's. He was anxious to try and find the owner and had phoned my brother and his wife to see if they could help. They checked with me and I confirmed it was the one I lost 45 years ago. The metal detector man (MDM) lived about 50 miles from my brother so it was decided not to risk posting the ring and he delivered it to the farm when he was there again a few weeks ago. I'm sorry the photographs are rubbish, I need to read my camera instructions but I also need to pack. 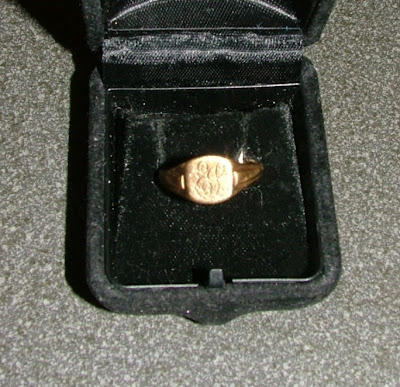 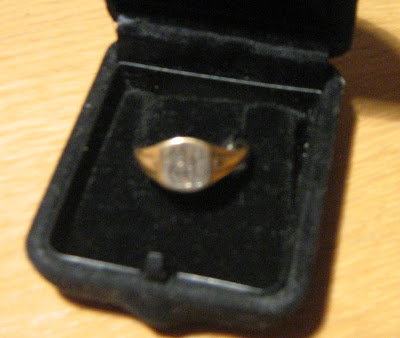 I can't tell you how happy I am to have it back, I never ever thought I'd see it again. My mum died almost 30 years ago, I wish she knew, I wish my cousin knew, and I wish MDM knew just how wonderfully kind he has been, he could so easily have cashed the ring in for scrap value. I'll write to him as soon as I get back from Italy and tell him how overjoyed I am, and I truly am, it's a dream come true.
So early in the morning (6.30 am flight apparently) I'm off to Italy for a week, for safety I'll leave the ring at home. Be back soon.
Posted by Jennyff at 19:04